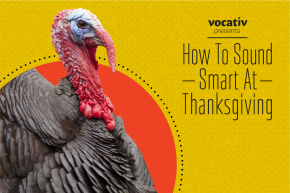 The leaves are turning colors, the autumn breeze is no longer pleasant and your aunt overcooked the turkey just like she does every year: it’s Thanksgiving. You haven’t seen some of your friends or relatives in months and there’s been a lot in the news lately. Here are some stats to make you sound like the head of the table while you carve the roast beast.

Bonus: You can print them out and take them to dinner with you.

With recent attacks on Paris and a bombing that brought down a Russian airliner, the Islamic State could be a primary topic of argument while you’re reaching for the best baked potato. Since ISIS carried out the largest attack on French soil since World War II, politicians and pundits have mulled over increased U.S. military operations in Syria and Iraq. We spoke to two former U.S. generals and a military historian who told us exactly what that’d look like.

Consumer drones have become so prevalent that the FAA recently recommended a registry for all of those privately-owned quadcopters your cousins will be test-flying (and definitely crashing) over the holidays. With the huge spike in drone incidents this year, and with drones becoming a common household item more and more every day, perhaps that’s not such a bad idea.

No, Syrian refugees are not terrorists, but confusion over this topic has been endorsed by 26 American governors who moved to prevent them from entering their respective states. The reality of the situation is that of the 784,000 refugees who’ve resettled in the United States since 9/11, only three have been arrested on possible terrorism charges — none of which were ever found to be planning a legitimate terror attack. And no, none of which were Syrian.

Terrorism gets a lot of attention in U.S. and will be a big topic of discussion at your dinner table, but it’s America’s gun problem that continues to kill exponentially more citizens each year. In 2013 alone, you could’ve almost filled Tampa Bay’s Tropicana Field with the startling amount of lives taken by guns. And let us not forget the loophole that allowed 2,000 suspected terrorists to purchase firearms over the last decade.

Now staging hundreds of protests spanning the entire country, the Black Lives Matter movement went from a small grassroots protest in Ferguson to the subject of presidential debate questions in just a short year. The hashtag has already changed social protest forever and shows no signs of slowing down.

This mysterious collective of hacking activists has waged a virtual war with ISIS, stifling the terror group’s digital communications. Its most recent victory came after the attacks on Paris when it managed to shut down a main discussion forum and thousands of ISIS-affiliated social media accounts.

More than half of Americans thinks GMOs are bad, so there’s a solid chance at least a few of your relatives hold the same sentiment. There’s a huge disconnect between science and public opinion right now, but should there be? Most, if not all studies “proving” that genetically modified foods are bad for you were already disproved.