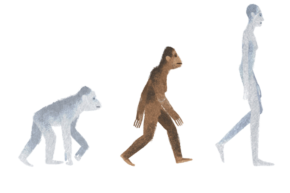 "Google: why are you trying to make a monkey out of me?"

The Google Doodle on Tuesday celebrates the anniversary of a remarkable discovery in the study of evolution. Naturally, everyone is furious.

Today’s doodle, the nickname for the modified version of its logo Google puts on its homepage, shows the evolution of one of our ancestors into a human being. It marks the 41-year anniversary of the discovery of Lucy, an ape-like species that helped scientists understand how modern humans evolved. Lucy was so remarkably well-preserved when she was discovered that scientists were able to determine she stood on her hind legs in Ethiopia 3.2 million years ago.

But not everyone loves Lucy. A swarm of creationists took to Twitter, objecting to Google’s presentation of evolution. Creationists generally believe God created the world in six days, like the Bible says. Ninety-eight percent of scientists disagree.

This is not the first time Google has experienced political opposition to its Doodles. On Veterans Day earlier this month, a Doodle showing veterans of multiple races angered white supremacists who thought it was an affront to white veterans.

Google thinks that we are descendants of apes, huh? NOT! We were created in the image of GOD. https://t.co/VUkXCIc11U

GOOGLE pushing their Evolution LIE!!!!!!!!!!!!!!!!!!. God created the Heavens and the Earth and everything in them.. pic.twitter.com/vkOwXo6fdN

Google: why are you trying to make a monkey out of me?

Scientists are also taking issue with the Doodle—for an entirely different reason. As some are pointing on Twitter, the image suggests that species evolved directly from one another in a single linear progression, which is not the case. Rather, they share a common ancestor.