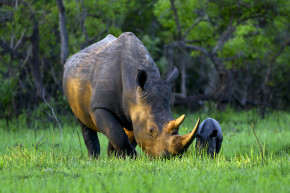 Why The IUCN Says White Rhinos Are NOT Near-Extinct
By Joshua A. Krisch

Why The IUCN Says White Rhinos Are NOT Near-Extinct

While you're mourning the demise of the San Diego Zoo's "Northern White Rhino," some scientists say white rhinos are no more endangered than tuna

A Northern White Rhinoceros, one of the last four in the world, died in the San Diego Zoo on Sunday. In light of the news, concerned citizens have rushed to mourn the now inevitable loss of the Northern White Rhino, a majestic species that has either existed for millions of years—or about five years (give or take).

“It’s quite a complicated issue and it’s a little bit controversial,” says Richard Emslie, Ph.D., rhino specialist for the International Union for Conservation of Nature, the worldwide organization behind the Red List of Threatened Species.

Here’s the problem. Most conservation biologists believe that the Northern White Rhino is a Central and East African subspecies of the (decidedly non-endangered) Southern White Rhino. By that logic, white rhinos are no more endangered than tuna—certainly in need of conservation efforts and attention (due to human activities such as poaching that have utterly destroyed several large mammals) but not dismally dwindled down to their last three individuals. The IUCN says, “the white rhino is the least endangered of the living rhino species, with a population of around 20,400.”

But five years ago, Colin Groves, Ph.D., Professor of Biological Anthropology at the Australian National University, proposed that the Northern White Rhino and the Southern White Rhino were two separate species, and inadvertently created an endangered rhinoceros. Because if you split up white rhinos into distinct Northern and Southern species, the Southern White is doing just fine—but the Northern White is already more or less extinct, with none left in the wild and only four in captivity (now make that three, San Diego).

“Part of the issue comes down to how you define different species,” Emslie explains. “Some approaches could be described as ‘ultra splitting,’ where you end up describing lots of species. Others may tend to lump species together a bit more, and you end up with not so many species.”

This is actually part of a long-standing feud between taxonomists and conservation biologists. For taxonomists, the greatest rush is in using modern genetic techniques to categorize living things into independent species. Phylogenetic researchers accomplish this by looking back at a species’ genetic history and tracing an evolutionary pathway between common ancestors. Using genetics, researchers can build family trees that connect the dots between DNA and illustrate how species branch away from common ancestors. The phylogenetic approach has almost nothing to do with observation, and everything to do with genes.

But phylogenetics, for all its cutting edge science, occasionally veers into the ridiculous. “It does seem a bit crazy to have a system where every month you have another species,” Emslie says. He points out that, in prior studies, Groves looked an taxonomy of ungulates—a diverse clade of large mammals that includes horses, rhinoceroses, and pigs—and used phylogenetics to almost double the number of accepted species from 143 to 279.

“One small antelope, they split into 11 different species,” he says.

The eternal struggle between so-called cladists (who rely on biological observations to classify species) and phylogeneticists (who take the genetic approach, even when it flies in the face of observations) is usually little more than academic quibbling. But when it comes to the white rhino, the debate takes a serious turn. Based on minor genetic differences between Northern and Southern white rhinos and, of all things, their dental records, Groves claims that the Northern White Rhino is a distinct (and nearly extinct) species of rhino, while Emslie and the IUCN argue that all white rhinos are one species, with northern and southern subspecies. Any physical or genetic differences between the subspecies, Emslie says, are likely recent adaptations to slightly different grazing areas and climates.

Regardless of classification, there’s still a glimmer of hope for the Northern White subspecies, Emslie says. “As a last-ditch effort to conserve some adaptive genes, they’re looking to try to artificially…make Northern embryos and try to implant those into surrogate White mothers.” But scientists are not optimistic about their chances of success.

And the stakes are high. If taxonomists are right, we’re about to lose a species of rhino. If the IUCN is right, we’ve lost a subspecies—which is terrible, but also sadly far more common. Several black rhino subspecies have also tragically gone extinct in previous years. “Obviously it’s regrettable—we’d like to conserve all subspecies,” Emslie says. “But losing a species is far greater magnitude of loss than losing a subspecies.”