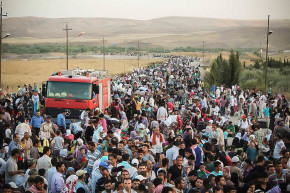 ‘Imagine It Was Brooklyn’ Post Puts Refugee Crisis In Perspective

An actor’s stirring rebuttal to the calls by some in the United States, including governors and members of Congress, to bar Syrian refugees in the wake of the Paris attacks has triggered an outpouring of support from around the world.

Thousands are sharing the remarks made by Thomas Keegan, whose credits include Veep, Washington’s Spies and a handful of other television shows. In a moving Facebook post, the actor challenged those opposed to allowing Syria’s war-torn immigrants from entering America to re-envision the circumstances.

“Imagine that you live in Brooklyn. With your spouse and two kids,” wrote the Washington, D.C.-area artist, who’d commented on a post about the refugee debate published by George Takei. “Suddenly, bombs are taking out city blocks all over New York, Boston, D.C.. Your neighbors are all dead, you have no money because working is not even in the equation. Your children are starving and weeping because maybe their best friend had his hands blown off. You cannot believe that it has come to this.”

To escape the carnage, the fictitious family heads to Canada, only to be turned away at the border. “When you get there, they say you can’t come in because Dylan Roof [sic], an extremist, killed 9 people in a church,” writes Keegan, referring to the 21-year-old charged with the racially-motivated shooting spree in South Carolina over the summer. “HE was American and white like you and he called himself a Christian like you, so…sorry.”

The actor concludes: “This is my American truth: I would rather die, with hope in my heart, in a country that opens its arms to those in need, than live, ashamed, in one which turns its back.”

I do not know this gentleman but saw his post on another page. Beautifully and eloquently articulated. His last sentence is haunting ...

Keegan’s words resonated and quickly spread across the Internet. Marquette McRae McKnight, a marketing CEO from Georgia, took a screen grab of the post and published it on her own Facebook account. As of Monday afternoon, her post had been shared over 17,000 times. Keegan later published his remarks on his own Facebook profile, earning another 1,300 shares.

“I read this and I cried,” wrote Lynne Wooby on Facebook. “Something I have never done easily. So please read this. For a moment put yourself in this position.”

The raw outpouring prompted by Keegan’s post reflects a wider emotional response in the wake of the Paris attacks, in which 130 people were killed, and how millions are connecting across social media to share their anger, grief and political attitudes. Impassioned points of view are finding receptive audiences online, with many of them going viral. A message from a person claiming to be a disabled veteran outraged over the reluctance to help Syrian refugees in the U.S. exploded on Tumblr. Phil Klay, a former U.S. marine and award-winning novelist, posted a 16-part tweet criticizing the House vote increasing restrictions on Syrian refugees. It too garnered attention.

Meanwhile, thousands of people using the hashtag #WakeUpAmerica have flooded Twitter with memes and messages warning about the dangers about those who wish to enter the country from the Middle East (which, in turn, has created its own viral backlash).

Keegan and McKnight did not immediately respond to interview requests made by Vocativ. Many, however, continue to offer their heartfelt reactions to Keegan’s message.

“A stirring parable of what it means to be an ordinary Syrian at this moment in history,” Ian McMahan said.

Sandy Isleib added:”This is so beautifully written. Stay to the end. Haunting.”

Deborah Joyce West concurred: “This could be any one of us.”