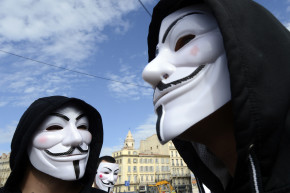 The Hacktivist Encyclopedia: Enemies of Anonymous, From ISIS to the KKK
By Jennings Brown

The Hacktivist Encyclopedia: Enemies of Anonymous, From ISIS to the KKK

What motivates these shadowy sentinels? An analysis of 95 attacks

Anonymous, the loose collective of “hacktivists,” first crawled out of the primordial slime of 4chan as a troll, but it has since evolved into a political beast that fights its own brand of vigilante justice. The group has most recently been in the news due to their anti-ISIS efforts (#OpISIS), which endeavored to remove thousands of Twitter handles associated with ISIS members from the service. So how did the group shift from Rickrolling to anti-terrorism?

A Vocativ analysis of nearly 100 publicized Anonymous operations and attacks executed since the group’s formation in 2006 show that in the last year, the hacktivist organization has changed direction. Throughout a decade of existence, Anonymous’ philosophy and methods have remained consistent, but its targets and motives have shifted in recent years. It’s steered away from fighting government corruption and Internet censorship, instead focusing its efforts more on terrorism, hate groups and police brutality.

Anonymous’ causes can be broken down into roughly nine categories: government corruption and oppression, Internet freedom, retaliation, police brutality, child abuse or rape, religious corruption, hate groups, corporatocrarcy and terrorism. The unifying theme amongst all their attacks is upholding freedom and protecting the innocent.

More A Map Of 500+ #BlackLivesMatter Protests Within The Last Year

Anonymous grew out of the (very NSFW—no, really) b/board of 4Chan.org, a forum where anonymous (lower case) users post anything their wicked, prankster hearts desire. Around 2006, Anonymous poured out of 4Chan in the form of raids and pranks. One of the first targets was Habbo, a virtual hotel and social networking site run by administrators that Anonymous believed to be racist. During Habbo raids, Anonymous members would create African-American avatars wearing black swimsuits and large Afros. These black swimmers would form a human swastika near the hotel pool and claim that the virtual pool was “closed” because of AIDS.

Over time, these raids became less gagster and more righteous. In December of 2006, the group attacked racist radio host Hal Turner, taking his website offline and costing him thousands. A year later Anonymous reportedly helped with the arrest of child predator Chris Forcand. And by 2008, Anonymous was ready for its world debut.

The first time Anonymous received major coverage was when the group launched Project Chanology—an attack on Scientology. The attack was initially inspired by what Anonymous viewed as Scientology’s assault on Internet freedom after the religious organization demanded Gawker remove a video of Tom Cruise going bananas for Scientology. But in their public message, Anonymous stated it was also fighting for the followers whose trust the religion abused.

The assault—like some raids that came before it and many operations that came after—mostly consisted of knocking Scientology websites offline with distributed denial of service (DDoS) attacks, but it was an IRL protest on February 10 that gave Anonymous a face. Thousands of members answered a “Call to Action” video by picketing Scientology centers in about 100 cities across the world. To hide their identity many wore Guy Fawkes masks from V for Vendetta. They held signs displaying inside jokes and memes; they paraded around with Longcat flying above them and they blared Rick Astley. The Internet had finally ruptured and poured into the streets.

Taking On The World

In 2009, Anonymous moved its attention to even larger organizations the group believed to be oppressive and deceitful, national governments. Following suspicion that the Iranian presidential election was rigged, Anonymous attacked Iranian government sites and teamed up with The Pirate Bay to create a website that helped the Iranian Green Movement exchange information that wasn’t censored by the government.

Anonymous amped up political attacks a couple years later during Arab Spring; during both the Tunisian and Egyptian revolutions, Anonymous members took down government websites in both countries. Later still, Anonymous factions would take up the fight against government bodies in Malaysia, India, Syria, China, Nigeria, Quebec, even Orlando, Florida—locations where they believed citizens were being persecuted or silenced. Out of all of Anonymous’ attacks, 42 percent have been against government bodies.

Though not all those government assaults were intended to protect citizens. Many were responses to attacks on the open Internet. Internet freedom is a common thread throughout almost all of Anonymous’ missions, but in 2010, that thread became its own rope that pulled the collective through massive operations aimed solely at entities trying to censor the Internet and prevent people from sharing information freely.

This new focus began with Operation Payback (aka Payback is a Bitch). Anonymous attacked the Recording Industry Association of America and the Motion Picture Association of America after finding out that film studios were working with Indian company Aiplex Software to plan DDoS attacks on sites sharing pirated content (most notably The Pirate Bay). Anonymous cast one of its widest nets ever, waging DDos attacks on several copyright organizations, the MPAA, production companies, Hustler magazine and KISS frontman Gene Simmons. All targeted websites were down for a collective 538 hours.

Operation Payback grew stronger with the creation of WikiLeaks. As Amazon.com, PayPal, Visa and Mastercard bowed to government pressure to end service to Julian Assange’s leak and whistleblowing organization, Anonymous made DDoS attacks on each company. PayPal, which was hit the hardest, lost more than $5 million as a result of the attacks.

About 23 percent of Anonymous’ missions were entirely cyber-libertarian in nature. Most of these took place in 2011 through 2013, a period when Chelsea Manning and Edward Snowden were leaking confidential military and government documents, inspiring widespread public interest in an open, uncensored and un-surveilled Internet.

Operations came to a brief halt in 2013 after the FBI arrested five prominent current and former Anonymous members. But when activity picked back up in fall of that year with Operation Ferguson, there was a noticeable difference. For starters, several new members were mixed in with some returning veterans. Also, this was a rare instance when Anonymous joined a cause after it had become national news. Usually Anonymous helps bring attention to issues, instead of latching on to them. What’s more, there were major mistakes. While attempting to name Michael Brown’s killer, Anonymous initially outed the wrong officer.

Of the roughly 13 operations that Anonymous has announced since their 2014 return, most of them have targeted police brutality, terrorists and hate groups. Some of those operations have received criticism similar to that of Operation Ferguson. Since Anonymous announced in October of this year they were going to release the information of 1,000 Ku Klux Klan members, they have only exposed a few hundred and most of those are already well-known white supremacists. The list erroneously included cartoonist Ben Garrison. He is not affiliated with the KKK, but his art has been altered into anti-Semitic memes and used by neo-Nazis.

In the wake of the al Qaeda-driven Charlie Hebdo shooting, Anonymous began targeting  “al Qaeda, the Islamic State and other terrorists.” A month later, Operation Ice ISIS focused solely on the Islamic State. After members of the terrorist group attacked Paris, killing 130, Anonymous declared war on ISIS. In French, Anonymous announced, “Expect massive cyber attacks. War is declared. Get prepared. Anonymous from all over the world will hunt you down.”

Since the attack began, Anonymous claims it has killed 20,000 ISIS-used Twitter accounts. But according to a recent report by The Daily Dot, Twitter employees who are working to take down any extremist accounts don’t pay attention to Anonymous lists because they’re “wildly inaccurate.” An Ars Technica investigation found that many of the Twitter accounts released by Anonymous aren’t affiliated with ISIS.

Anonymous has since replied to some of these criticisms on Twitter, apologizing for misinforming and promising to be better vigilantes: “We’re restructuring everything for #OpParis, #OpISIS & #OpIceISIS to actually do something — to make a difference.”