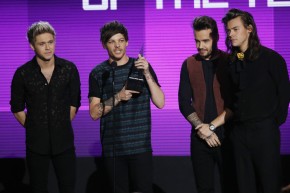 They might be the American Music Awards, but the world was watching

The London-based One Direction won big at the American Music Awards on Sunday, when the English-Irish band was named artist of the year and the favorite pop/rock group—showing that the awards ceremony isn’t only about American music. It’s also not only about American fans: The AMAs drew attention from Argentina to Mexico and Brazil, and was discussed in a slew of languages on Twitter.

Vocativ analyzed more than three million tweets and retweets using the hashtag #AMAs on Sunday night, finding that an estimated 39 percent of them were posted in Portuguese or Spanish. After English, these languages were the second and third most-used in tweets that included the hashtag, respectively.

Among English and Spanish speakers, One Direction won the awards show on Twitter, where people posting in both languages mentioned the boy band the most. Among Portuguese speakers, Selena Gomez was mentioned the most followed by Demi Lovato, who was also a hot topic among those tweeting in Spanish.

A Vocativ analysis of Facebook users interested in the AMAs also revealed that the show has a large following on the social media platform among Spanish speakers: 27 percent of the audience interested in the AMAs on Facebook uses Spanish. An analysis also found that more geo-tagged tweets with the hashtag #AMAs came from Latin America than the U.S.

Millions of people tuned in on Sunday to watch the awards show that featured over a dozen live performances by stars including Ariana Grande, Selena Gomez, Demi Lovato, Justin Bieber and Five Seconds of Summer. Taylor Swift won best pop/rock album and favorite contemporary artist, while Nicki Minaj was crowned the ceremony’s favorite hip hop artist of the year.

Paris was also a focus of Sunday’s show following a string of deadly terror attacks that struck the city, killing 130 people. “Tonight we honor the victims of the unimaginable violence that has taken place in Paris and around the world,” actor-musician Jared Leto said. “The entire world matters, and peace is possible.”