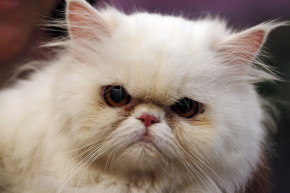 Authorities searching for terrorists called for a social media blackout. In return, they got cat pics.

Scouring the Belgian capital for suspected terrorists, federal police tweeted the public asking it to keep information about the Brussels manhunt under wraps. The Internet responded with meow-worthy force.

Brussels has been on lockdown since Saturday as authorities searched for Salah Abdeslam, one of the Paris attackers who’s been on the run for more than a week now. Another suspect is also wanted by police.

Authorities said they believed suspects could be planning an attack in Brussels that would mirror the deadly series of attacks in Paris on November 13, which killed 130 people and wounded hundreds more. ISIS claimed responsibility for the attack. In the days that followed its affiliates across Syria and Iraq released videos congratulating the attackers and warning Western countries that this was only the beginning of ISIS’ war abroad.

People on the Internet banded together not only to support a blackout, but also to create something more light-hearted out of the hashtag, #BrusselsLockdown, which was originally intended to keep people informed on how much longer the lockdown would last. In the two hours after the Brussels police tweeted the request for a blackout, #BrusselsLockdown was used over 65,000 times, and the overwhelming majority of the tweets involved cat pictures:

Police ask public not to tweet about operations during #BrusselsLockdown. So folks tweet cat pics instead. Or dogs. pic.twitter.com/i6J2KpuUL2