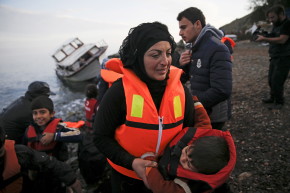 The number of migrants and refugees reaching Lesbos by boat dropped for the first time this year after a record number of them reached the Greek island in October, according to the UN Refugee Agency—but the flood of people continues on a massive scale.

A stunning 135,021 people arrived in Lesbos last month, the United Nations High Commissioner for Refugees says—far more than the 100,000 people who actually live there. That breaks down to approximately 4,400 migrants arriving every single day on average in October, dipping to about 3,200 arrivals daily during the first three weeks of November, data from the UNHCR showed.

The drop comes amid mounting concern that Islamic State militants could be hiding among a wave of refugees heading to the E.U. At least two of the suicide bombers who carried out the recent deadly attacks across Paris passed through Greece, French prosecutors have said. Fears have also swelled in the U.S., where the House overwhelmingly passed a bill last week demanding stringent checks on refugees.

Lesbos, a small Greek island in the Mediterranean Sea, is only about 10 miles from Turkey’s coast, making it a key part of a popular transit route for migrants trying to reach Europe. This month, 47 percent of people who reached the island were Syrian, while 37 percent were Afghani nationals. Others came from countries including Iraq and Iran, UNHCR data showed.

In October alone, a record 218,000 people in total crossed the Mediterranean trying to get to Europe—almost as many as the number of people who crossed during the whole of 2014, UNHCR said.