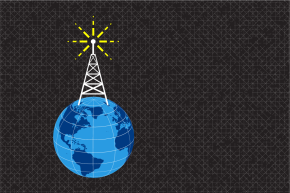 The original radio signals that broadcast many of our old TV favorites have by now left our solar system and continued outwards into space. While we sit here on Earth watching reruns on Netflix the terrestrial TV signals of old are now decidedly extra-terrestrial.

Brett Morris, a graduate student of astronomy and astrobiology at the University of Washington, developed a TwitterBot that tracks exactly how far they’ve traveled. He set up a Twitter account, Exoplanet TV Guide, that tweets out in real time when premiere broadcasts of U.S. TV shows arrive on exoplanets dozens of lightyears away, with the help of Wikipedia, some Python scripts, exoplanets.org, and OSCAAR.

Morris first became interested in exoplanets after the Kepler mission cemented their importance in astronomy. When he realized that the closest exoplanets were at distances which humans could relate to, he married that concept with inspiration from his friend’s project MockTwain, which tweeted out “The Adventures of Tom Sawyer” one tweet at a time. So while procrastinating during a busy finals week in 2014, he created three Twitter bots, including Exoplanet TV Guide and Far Away Planets, which charts what observers on distant planets would be able to see through a theoretical massive telescope.

“I think it’s easier to relate to [Exoplanet TV Guide] because it explores a signal that was emitted on purpose for someone to pick up getting received by an exoplanet,” Morris said.

But would someone sitting on an exoplanet actually be able to watch one of these classic television shows? Only in principle, and by use of an “impossibly large radio dish, perhaps larger than the Earth and advanced technologies we don’t have on Earth,” he said.

And, he added, the Earth’s rotation could pose additional problems. “If the radio tower that’s emitting the signal was on the side of the Earth that you’re facing at the time it’s transmitting, if you started watching the TV show as the radio tower was about to rotate around to the night side of the Earth and you could only see the day side, you might lose your transmission right in the middle,” he laughed. “Apart from small complications like that, it’s theoretically possible, but practically likely impossible.”