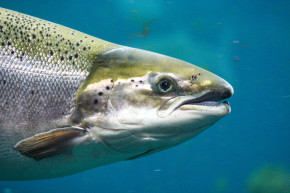 In a victory for GMOs, AquAdvantage salmon becomes the first genetically-modified animal to be approved for human consumption in the United States

Genetically modified salmon is kind of incredible. These GMO fish can grow faster and larger than conventional salmon, and they provide the first realistic, cost-efficient alternative to the rampant over-fishing of wild salmon.

Now, after 19 years of regulatory consideration, the FDA has finally approved AquaBounty Technology’s GM fish. This is the first time that the FDA has approved a genetically modified animal for human consumption, Popular Science reports. The fish is more or less an Atlantic salmon, with a few growth hormones and antifreeze genes thrown into the mix, allowing the fish to grow year-round (instead of only during the spring and summer) and grow to market size in 16 months rather than the conventional three years.

AquaBounty will raise the fish on land, in specialized fish farms where the risk of GM fish escaping into the wild to breed with native species would be impossible—unless the GMOs sprout legs and walk to the ocean themselves (which is something that anti-GMO activists kind of worry about). The FDA also determined, after examining both the manufacturer’s data and several independent studies, that GMO salmon are entirely safe:

“The data demonstrated that the inserted genes remained stable over several generations of fish, that food from the GE salmon is safe to eat by humans and animals, that the genetic engineering is safe for the fish, and the salmon meets the sponsor’s claim about faster growth.”

GMOs have already been found safe in general for both animals and humans in literally thousands of independent, peer-reviewed studies. But evidence never stopped anti-GMO activists from freaking out. Here’s a selection from our Junk Science archive, to help debunk the junk surrounding GMOs: