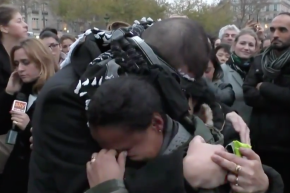 Donald Trump said there’s “no choice” that the U.S. has to close mosques. Fox News’ Todd Starnes wrote a column saying he wasn’t “Islamophobic,” but that he “didn’t want to get blown up.” The “finger of blame is pointing at the Muslim community,” CNN anchor Isha Sesay said to Yaser Louati of the Collective Against Islamophobia in France on CNN Sunday morning.

After a series of terrorist attacks in Paris and Beirut last week, there were people who looked to the entire international Muslim community to take responsibility for the carnage. Muslims around the world have suffered hate crimes and been subject to humiliation and torture at the hands of people who blame all Muslims — or anyone they think may appear to be a Muslim — for recent terrorist attacks committed by radical Islamists.

But instead, many Muslims anticipated this Islamophobic backlash, and they battled it online with statements arguing about its hypocrisy with candid banter and memes. Here’s a roundup of the best posts:

“I can’t even get a text back”

As right-wing and nationalist groups in the U.S. and Europe renewed pressure on Muslims to denounce ISIS and even fight them, one of the most clever reactions came from a young British Muslim, Kash Ali:

Ali’s comment went viral overnight as an example of how most Muslims are just trying to live their daily lives.

The idea that ISIS is not representative of all Muslims is not born out of this most recent terrorist attack. The British group The Active Change Foundation started using the hashtag #NotInMyName in 2014 to fight the idea that ISIS represents all Muslims, and after the attacks in Paris, the #NotInMyName hashtag skyrocketed as a way for Muslims to express the view that terrorism was not done in the name of people who practice Islam.

“Because your caliphate does not represent the Ummah #NotInMyName“

I am a Muslima. ISIS, Al Qaeda, Boko Haram, Taliban, Al Shabab don’t do it in my name. Stop the terrorists now #NotInMyName

To Paris From Pakistan

A news group called Pakistani Comedians comedians posted a video on its Facebook page with four Pakistanis saying they wouldn’t be held responsible for the Paris attacks just because they were Muslims. They said blaming all Muslims for ISIS’ actions was like “blaming all Germans for the actions of Hitler.”

“Muslims are the biggest victims of terrorism,” they said, while also arguing that Muslims are not prone to extreme anger or violence. “Trust me, the only time an average Muslim is frustrated is when Nutella is out of stock. Angry? When we lose at FIFA. Annoyed? When we don’t get our morning coffee,” they joked.

The video garnered 2.7 million views and almost 40,000 shares on Facebook in three days.

A man blindfolded himself and stood near the mourning site at Place de la Republique square in Paris. He put down two signs that read, “I’m a Muslim, but I’m told that I’m a terrorist” and “I trust you, do you trust me? If yes, hug me.” A video posted by In the Now on YouTube Monday showed several people hugging him and some bystanders crying.

Hundreds of people tweeted clever and touching statements using #MuslimsAreNotTerrorists to tote their beliefs in Islam standing for peace, not terrorism: