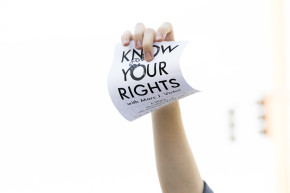 Earlier this month, UC Berkeley student Stephanie Garcia controversially went public with her story of an alleged sexual assault, and activists spread posters on campus identifying her alleged attacker. Though the accused was expelled by the university earlier this year, he appealed that decision; in response, on November 18, activists organized a small protest where they again distributed flyers bearing his full name and photo.

The accused’s picture and Garcia’s story have already made it beyond the UC Berkeley campus through social media. Garcia spoke about her decision to name her alleged attacker on a panel organized by interdisciplinary group Coalition to Defend Affirmative Action, Integration and Immigrant Rights And Fight For Equality By Any Means Necessary (BAMN), which was later uploaded to YouTube. Reddit and YikYak are buzzing with gossip about the case and a censored version of the BAMN poster has received over 80,000 views on the image sharing site Imgur.

This is the latest in a series of highly publicized incidents of an accused rapist being publicly named. In recent years, women have taken to Twitter, Facebook and Tumblr to out their alleged rapists. In 2011, high school student Savannah Deitrich defied a court order and publicly named her alleged attackers on Twitter. More recently, lists of alleged campus rapists began appearing as bathroom graffiti at Columbia University. Emma Sulkowicz, the Columbia student whose art piece in response to her alleged sexual assault, “Mattress Performance (Carry That Weight),” garnered national attention, filed a police report detailing the alleged assault after seeing her alleged attacker’s name on one such list. While her art piece did not specifically name the man she says raped her, her alleged attacker sued Columbia, claiming that the university wrongly “tolerated” Sulkowicz’s performance. Columbia has since filed a motion to dismiss the suit.

Often, such tactics raise controversy and concerns. The UC Berkeley protest is no exception, as was perhaps evidenced by the small turnout of just over a dozen protesters. “[These protestors] are not working directly with student activists that many of us know,” said Thanh M. Bercher, director of the anti-sexual assault Cal Consent Campaign, in an email. “Their new movement is based in public attention, not necessarily community building and long-term solutions.”

“Make sure this expelled rapist doesn’t come back,” said a male activist as he handed out posters to passing students at the protest. The small group marched down Telegraph Avenue, past street lamps adorned with the alleged rapist’s face. Activists used a bullhorn for several chants, including, “Rapists on campus? Hell no,” they then shouted the accused’s full name, continuing, “has got to go.” As they rounded a corner, passing People’s Park, a famous protest site, a group of young men playing basketball stopped in their tracks to watch.

According to the protesters, the university expelled the accused in August after finding him guilty of violating the school’s code of conduct and student housing policies against physical abuse, harassment and sexual offenses. The university refused to confirm these details, telling Vocativ, “Student records are confidential.” After the hearing, BAMN activists reported that the university had decided to uphold its original misconduct ruling. The Alameda County District Attorney’s office told KTVU that it had reviewed the case and decided against pressing charges.

BAMN activists at the protest say these radical measures are necessary. “I think it’s really important, because people need to realize that anyone can do this,” said Simrgot Mahal, a junior at UC Berkeley, who held a sign reading, “KEEP RAPISTS OFF UC BERKELEY.” “Hopefully someone will recognize this poor, poor unfortunate creature,” she said, sarcastically, “and do something about it—because he kind of deserves some consequences.”

Many online commentators expressed disapproval of Garcia’s tactics. By revealing the identity of her alleged attacker, “I’m able to get justice for myself,” Garcia said during her BAMN panel appearance. “My fate and my sanity at this campus … is not in the hands of an administration. It’s in mine.” Garcia accused the administration of taking too long to process her case and failing to follow Title IX protocol. Garcia’s accusations come on the heels of a lawsuit filed earlier this year by three current and former students of UC Berkeley alleging school administration didn’t respond appropriately to their sexual assault complaints.

It’s not unusual for survivors of sexual assault to encounter shaming—and that is part of why activists say that naming the accused is so important. “A lot of the people in the group found that the stigma that’s put on rape victims is so heavy,” said Julia Osborne, a member of BAMN and a UC Berkeley junior. “We wanted to put his picture out there, because we wanted to put that stigma that sexual assault victims feel on to him.”