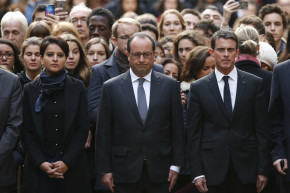 Can Europe Stop The Next Terror Plot?
By Jamie Tarabay

Can Europe Stop The Next Terror Plot?

The deadly attacks that hit Paris were organized and planned in other European countries, broadening the danger and the risk of more to come

The network of terror that orchestrated the deadly attacks in Paris was not confined to France. Nor is the climate of fear, as the bomb scare in Hanover, Germany on Tuesday showed. So what does France and the rest of Europe do now? Is there a way that the continent can prevent another attack of this scale? Is it time for its leaders to become more involved in fighting ISIS where it lives? Here are some of the key questions that the leaders of Europe, and their people, will be asking themselves in the coming days and weeks, and some answers to them.

Can Europe protect itself?

Some European countries, like Germany and France, have done a reasonably good job of putting together a counterterror apparatus. But save for the U.K. and its Irish neighbor, no European country is an island. A failure of intelligence, police work or anti-radicalization campaigns in any country on the continent can have tragic consequences for the rest—the attacks in Paris made that all too clear.

Belgium, the country from which the attacks on Paris were apparently set in motion, has repeatedly failed to protect itself and its neighbors from terror, notes Christopher Swift, an adjunct professor of national security studies at Georgetown University. “The Belgians do a lousy job dealing with terrorist threats, and there’s a large cohort of angry, dispossessed Muslim men in France who would be potential recruits,” he told Vocativ. Last year, Belgium supplied more foreign fighters to Sunni militant organizations per capita than any other Western country.

Even if they can get Belgium and other countries that have done a poor job of responding to terror to step up, many European states will still have major problems to contend with. Without a massive interdiction effort in the Mediterranean Sea, they will never be able to stop every person who wants to get there from the Middle East, Afghanistan, and countries in Africa. And unless it chooses to turn a collective blind eye to mass suffering, Europe will have to deal in some way with the waves of refugees washing up on shore. That means spending more money on security and more scrutiny of migrants. That’s not to mention those people who—like most of the Paris attackers—are already in Europe, and becoming radicalized there. Addressing that issue means figuring out how to counter radicalization, but it also means stepping up surveillance, stricter intra-European border controls, and it will likely mean governments dealing with hard questions about civil liberties. William Courtney, a former U.S. ambassador to multiple Eastern European nations, says E.U. countries will also have to develop “more robust database sharing with countries in the greater Middle East.”

Does it have the military power it would need to defeat ISIS?

Yes. If it wanted to, France could likely defeat ISIS on its own. So could the U.S., and the U.K., and Germany, and Russia. That doesn’t mean any of them will.

Destroying ISIS unilaterally is doable; but it’s not easy or quick. Any country that took on the job by itself would go in knowing that many of its soldiers would die, that it would have to spend many billions of dollars, and that it would have to be there for years, if not decades—first to defeat ISIS and then to stick around and make sure that it or something like it doesn’t spring right back up again. The economic and political consequences would be enormous.

France is already part of the U.S.-led coalition bombing ISIS in Iraq and Syria, and after Paris, it has increased its efforts there. If it wants to further intensify that campaign, it could call upon its fellow NATO countries, including the U.S. and the U.K., to join it. Getting all of NATO involved would mean giving the leaders in all of its member states at least some of the political cover they’d likely need.

Does it have the will when faced with jihadists?

Europe has a mixed record when faced with terrorism at home. Three days after 191 people were killed in bombings on commuter trains in Spain in 2004, the political opposition—which had promised an end to the country’s involvement in the Iraq war—won power. It withdrew Spanish troops from Iraq before the year was up. The July 2007 bombings in London, had the opposite effect, with the British deciding to maintain their presence in Iraq as a key ally to the U.S. until the very end. If the airstrikes in Syria that were its initial reaction to the Paris attacks are any indication, France will likely follow the British example.

Can the U.S. rely on Europe?

To a certain degree. A number of countries in Europe are already taking part in the fight against ISIS in Syria and Iraq. If the White House wants more to join in, it’s likely that may happen now. The problem is getting NATO as a whole to agree to anything en masse. The alliance has 28 members, and they each have their own concerns, economic, military and political. They can be convinced to go along if they’re not forced to put too much skin in the game, though. Consensus in NATO, says Larry Chalmer, the former director of the NATO Education Center at National Defense University, is not accomplished by “everyone saying ‘Yes,’ but by no one saying ‘No.’ Every nation has to suit up, but not every nation has to play.”

On the other hand, Europe has not shown that it can be truly effective at fighting radicalization or homegrown terror. Relatively few people in the U.S. have joined ISIS and other extremist groups; Europe has not been so lucky. That might not be cause for concern were it not for the fact that terrorists groomed in Europe have already come to the U.S. Several of the key players in the 9/11 attacks were radicalized in Germany.

How does this all impact President Vladimir Putin and Russia?

It’s a balancing act for Putin. He wants to find a way for all this to end with a Syrian government that is, whether headed by current president Bashar al-Assad or not, still a client state of Moscow’s. On the other hand, he cannot afford to have Russians dying in terrorist attacks, as over 200 did in the apparent bombing of Metrojet Flight 9268 in Egypt last month. The prospect of ISIS launching an attack on Russian soil, which the terror group has promised, must also be newly frightening after what happened in Paris.

As a result, Putin and NATO leaders may put aside their ongoing disagreements over other issues to forge an alliance to battle ISIS together. That already appears to be happening to some degree. Putin and President Obama met on the sidelines of the G20 summit in Turkey this week and agreed to support a cease fire in Syria, which would be followed by U.N.-led negotiations between the regime and opposition forces.

“The security morass in Syria is too big for any one country to quell or manage,” said Courtney, the former ambassador. “Thus Russia is eager to join with the West in a quest for a political solution that might help retain essential elements of the current government.”