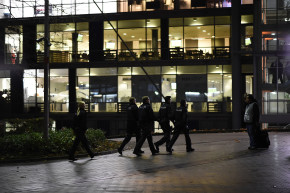 The game, which German Chancellor Merkel was due to attend, comes days after terror attacks hit Paris

A soccer stadium in Hanover, Germany was evacuated after a “serious” threat of an attack less than two hours before a game with the Netherlands was due to start.

“We had concrete evidence that someone wanted to set off an explosive device in the stadium,” Hanover’s chief of police, Volker Kluwe said according to the AP. Lower Saxony Interior Minister Boris Pistorius told German TV no explosives had been found and no arrests had been made, the AP reported. A rumor that explosives were put in an ambulance outside the stadium was not confirmed, Pistorius said.

German Chancellor Angela Merkel and two Dutch government ministers were supposed to attend the match, but they had not arrived before the evacuation of the stadium. The order to evacuate came approximately an hour and a half before the game started, when most people were still waiting outside the stadium, the Guardian reports. Fans were asked not to panic and told to head home.

People at the game posted photos and videos from the evacuation scene: