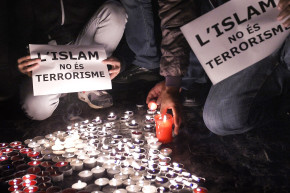 Muslims Do NOT Carry Out Most Terrorist Attacks
By Joshua A. Krisch

Muslims Do NOT Carry Out Most Terrorist Attacks

There were 746 terrorist attacks in Europe between 2011 and 2014. Only eight were religiously-inspired

Islamic terrorists have claimed responsibility for the horrific attacks that claimed at least 129 lives in France. Now, you know that most Muslims are not terrorists. Even if Muslims were hypothetically behind every single one of the 140,000 terror attacks committed worldwide since 1970, those terrorists would represent barely 0.009 percent of global Islam. It’s easy, however, to fall into the slightly more believable trap that most acts of terror are committed by Islamic extremists.

Here’s the data from Europol. Decide for yourself:

By the way, that’s about 1 percent. One percent of all terrorist attacks in the European Union between 2011 and 2014 were religiously-motivated.

“Religiously motivated” includes Islamic extremists, as well as Christians, Jews, Hindus and Buddhists who were motivated by their religion to hurt others. The rest were a mixture of violent separatists, far left extremists (like the Sect of Revolutionaries in Greece) and far-right extremists (pro-Ukrainian forces).

Prior to 2011, Europol categorized terrorist attacks differently, but those numbers aren’t any less eye-opening. Between 2006 and 2010, member states recorded 2,131 terrorist attacks in the EU and only eight were “Islamist”. For those of you keeping score, that means Muslim terrorists were responsible for a meager 0.3 percent of EU terrorism during those years.

Incidentally, the data help dispel another popular myth: religion is not the main cause of terror or war. Proof abounds. Out of the 1,763 wars listed in the Encyclopedia of Wars, only 123 are classified as “religious in nature” and a 2013 study from the Institute for Economics and Peace found “no general causal relationship” between religions and conflict. Religiously-motivated terrorism (especially when it involves Islamic extremists) may get the best press, but the data suggest most terrorists have far less godly motivations.

Now to be fair, Islamic and religious extremism is still a growing problem in Europe. Among EU member states, attempted terrorist attacks inspired by religion have spiked from 179 attempts in 2010 to 395 attempts in 2014. And the body count for religious extremism tends to be higher than that of separatist attacks. In 2012, for instance, only 2.8 percent of the terrorist attacks in Europe were religiously-motivated, but nearly half of the people murdered in these attacks were killed by religiously-inspired terrorists.

Religious extremists appear to carry out fewer terrorist attacks on the whole (and fail more often that not) but, when they succeed, a lot of people die.