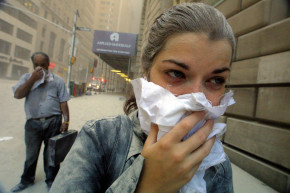 Immediately after the brutal attacks on France, rescue workers scrambled to save lives while officials rushed to strike back and mitigate their losses. But in the weeks and months following the massacre that claimed 132 lives and injured hundreds more, there will be a different kind of healing in France.

“Deliberate violence creates longer lasting mental health effects than natural disasters or accidents,” according to a report on post-traumatic stress disorder, written by the U.S. Department of Veterans Affairs. “Human malevolence is likely to add to the complexities and difficulties of psychological adjustment.”

PTSD is an anxiety disorder that can haunt victims of disaster even years after the event. Symptoms include flashbacks and depression, often in response to certain “triggers” that remind victims of the horrors that they witnessed. Studies suggest roughly 45 million people around the world—and eight percent of Americans—are living with PTSD.

But post-traumatic stress disorder is not the inevitable result of every tragedy. The VA report suggests most natural disasters foster a sort of community-wide resilience, and that survivors who do suffer from stress tend to recover within 16 months. One fascinating study found that very few survivors of a 1974 Ohio tornado reported any stress—ten years later, most survivors said the experience had made them better people, more prepared to handle a disaster. Terrorism, however, is fundamentally different.

Human-made disasters, or terrorist attacks that involve bombings and mass shootings tend to have the deepest effect on our psyches, partially because victims feel that an injustice has been done and seek revenge. After an attack, these feelings can ripple throughout entire cities, causing depression, drug use and PTSD even among people who were barely involved in the actual incident.

Shortly after the 1995 Oklahoma City Bombing, for instance, almost half of the survivors exposed to the blast reported anxiety and depression, while over one third reported PTSD—as expected. But even years later, Oklahoma City had higher rates of alcohol and drug abuse than it did before the attack, while 16 percent of children and adolescents living 100 miles away from Oklahoma City still reported PTSD symptoms—which was considerably less expected, according to the VA report.

Researchers found similar relics of psychological trauma among New York City residents post-9/11. Six months after the disaster, rates of cigarette, marijuana and alcohol use spiked in Manhattan. Roughly 30 percent of victims injured in the attacks suffered from PTSD, while 11 percent of New York residents who were not even involved in the attacks reported PTSD symptoms.

These incidents serve as case studies that can help public health officials predict and plan for how French citizens are likely to respond to terrorism. Sure, there will be some showings of communal resilience—Viva La France!—and inevitably, recovery and reconciliation.

But we can also expect to see higher levels of anxiety, depression, drug use and PTSD among French citizens—even those not directly involved in the attacks.