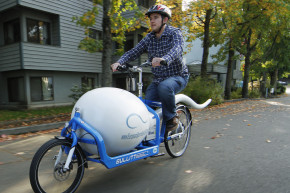 What Women Are Looking For In A Sperm Donor
By Joshua A. Krisch

What Women Are Looking For In A Sperm Donor

Guys who are intellectual, shy and calm tend to perform better on the online sperm donor market than extroverted men, according to a new analysis published in the journal Applied Economics. Although there could be several reasons for this odd trend—not the least of which being that only 56 men were surveyed—it is the first study to shed light the secretive economics behind online sperm sales.

“Women were far less likely to choose the sperm of fretful or socially awkward men,” said Stephen Whyte, an economist at Queensland University in Australia in a prepared statement. “But at the same time, those with lively, extroverted personalities were also less successful in being chosen.”

Online sperm donation is an increasingly popular choice for women who want to conceive but can’t afford to buy sperm at a conventional bank (where one vial can cost $700). Online sperm donation can be performed through artificial insemination—or the old fashioned way—but, regardless of method, informal donation often requires women to interact with the man behind the sperm.

Economists at Queensland University saw this as an opportunity to figure out how women select sperm donors. They trawled through regulated sperm donation websites (as well as some of the shadier options) and surveyed a small sample of 56 men who had recently donated sperm. They were surprised to find that successful donors were not aggressive marketers or charismatic Casanovas—but quieter, calmer and more intellectual gentlemen.

“You would expect in an online setting, men would have to sell or promote themselves to women, and extroverted men should be better at doing that,” Whyte said. “But what we find is actually the opposite.”

There are a bunch of reasons why women may prefer introverted sperm donors. At least one scientific study has shown that women prefer quiet, intellectual guys (although several other studies have suggested otherwise). It is also possible that women who are actually meeting their donors in person think they’re less likely to be murdered by a quiet intellectual than a loud extrovert. As Margaret Atwood famously said, “Men are afraid that women will laugh at them. Women are afraid that men will kill them.”

And then there’s the even more likely possibility that, with nothing but a sample size of 56 and an online survey, we still have virtually no idea whether or not women prefer shy guy sperm. So take heart, male extroverts (and introverts)—the science still isn’t in on who has the most marketable sperm.