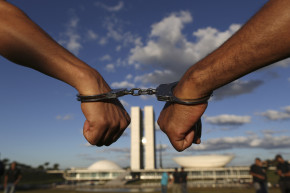 Youth offenders who run afoul of the law have mortality rates 1.5 times higher than the general population

The justice system is no place for children. Teens who run afoul of the law, whether with a simple arrest or incarceration, are significantly more likely than the average youth to die violently in the following years, according to a new study published in the American Journal of Preventive Medicine.

“For all youth, regardless of race, involvement in the justice system beyond arrest significantly increases risk of early, violent death,” said Matthew C. Aalsma of the Indiana University School of Medicine, in a prepared statement.

Mortality rates for youth offenders appear to be 1.5 times higher than that of the general population, the authors write. They also noted that youths were more likely to die prematurely, the more serious their involvement with the criminal justice system:

For the study, scientists from the Indiana University School of Medicine analyzed criminal and death records for nearly 50,000 young people, and sorted their interactions with the criminal justice system into four categories: arrested, detained, incarcerated and transferred to adult court. Five years after an arrest, the data suggest premature death rates for children transferred to adult court are about three times higher than youth who are simply arrested.

Researchers also examined how these youth offenders died. They found that the most common age of death was between 19 and 21 years old, that young men were more likely to die prematurely than young women—and that nearly half of all deaths among youth offenders were homicides:

Now, it’s nearly impossible to say whether the justice system causes premature death, per se (although there’s obviously a pretty strong correlation). It is likely that many factors come together to increase a teenager’s chances of premature death, and that the sort of teenager who is usually caught up in the criminal justice system is also the sort of teenager who is already at-risk.

One recurring theme does appear in the research—lower income, racial minorities are disproportionately likely to tangle with the law, and die prematurely. Even in this very study, the majority of premature deaths occurred among black males. “It is well established that black youth, compared with white youth, are over-represented in the justice system and bear a disproportionate burden of death by homicide,” Aalsma writes. “Continued intervention is necessary to redress these grim findings.”