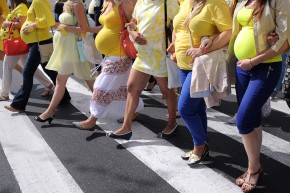 Pregnant Women Are Gaining Too Much Weight
By Allee Manning

Pregnant Women Are Gaining Too Much Weight

Only one third of women gain the correct, healthy amount of weight for their child

Most pregnant women in the United States gain either more or less weight while pregnant than is considered safe for their child.

A new study from the Center for Disease Control and Prevention analyzed approximately 3 million women who gave birth in 2013 and found that 47.5 percent gained more than the Institute of Medicine’s recommended “Gestational Weight Gain”—the amount of weight gain considered healthy based on their weight before pregnancy. One in five gained less than the recommended GWG. In 17 of the 46 states where data was collected, at least half of the women surveyed gained excessive weight.

Why does it matter? According to the CDC report, mothers who put on excessive weight during pregnancy are more likely to be obese in the future—and so are their babies. Inadequate weight gain during pregnancy increases the risk of a baby being born underweight.

According to the study, the appropriate amount of weight a pregnant woman should gain is 28–40 pounds for those who were underweight pre-pregnancy, 25–35 pounds for women of normal weight, 15–25 pounds for overweight women, and 11–20 pounds for obese women.