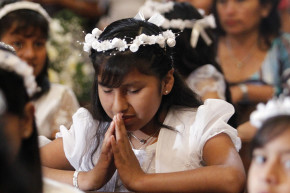 Study: Atheist Kids Are Nicer Than Christians, Muslims
By Joshua A. Krisch

Religion does not make children more altruistic, according to a new study published in Current Biology. In fact, the data suggests that kids from practicing Christian and Muslim families are less likely to share, and more likely to judge others harshly, than those raised in less religious environments:

“Generosity” isn’t easy to measure, but social scientists have devised a clever experiment called the Dictator Game that tests whether participants will share a cash prize with others. For this particular study, which examined children between the ages of five and 12, scientists modified the experiment by offering each child ten stickers, and then giving him or her the option to donate some stickers to others. The adults turned away while they decided.

Religious kids were not good at sharing their stickers. “Our findings contradict the common-sense and popular assumption that children from religious households are more altruistic,” said Jean Decety, neuroscientist at the University of Chicago and coauthor on the study, in a prepared statement. “Kids from atheist and non-religious families were, in fact, more generous.”

Now, this was a fairly robust study. The 1,170 children interviewed came from the United States, Canada, Jordan, Turkey, South Africa and China. They were Christian (24 percent), Muslim (43 percent), non-religious (28 percent) and various other religions (roughly 5 percent). It’s some good data.

It’s not the only data, however. A major review paper published in the journal Science in 2008 contradicted many of these findings, and even reported that religious adults are more likely to share a $10 reward with an anonymous subject (yet another variation of the Dictator Game). Subsequent studies have also shown that atheists are are less charitable than religious folk; they donate less blood and only infrequently give change to homeless people. Other studies have found that religious people are more helpful, generous and honest than their non-religious counterparts.

Does religion make kids more or less generous? Tell us your thoughts.

Still, this isn’t the first study to suggest that religion is bad for our morals, and the authors are prepared to draw pretty sweeping conclusions: “Our findings…call into question whether religion is vital for moral development,” they write, “supporting the idea that the secularization of moral discourse will not reduce human kindness—in fact, it will do just the opposite.”