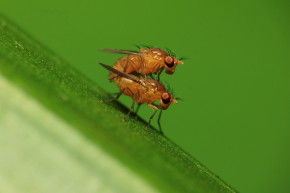 Junk Science: Women Are Not Friskier In Colder Climates
By Joshua A. Krisch

Junk Science: Women Are Not Friskier In Colder Climates

Scientists found that fruit flies are less monogamous when they’re in cold climates. And somehow that became “women get friskier in the winter”

Humans aren’t the only animals who mess around with multiple partners. Scientists have documented polygamy in insects, birds, fish and reptiles. When researchers tried to publish a study that noted similar phenomena in fruit flies, however, something clearly got lost in translation.

“Women More Frisky When Its Cold,” one headline from TodayFM blared. Times of India ran with, “Females have more sexual partners in winters.” And the Independent put their own ridiculous take on the study in their “science” section (which should be funny, but it isn’t). Of course, each outlet waited until the text in the story itself to reveal one, enormous caveat: it was a study in fruit flies.

Unfortunately, the study had nothing do with whether women get friskier in the winter—and to make matters worse, the researchers weren’t even studying whether fruit flies are less monogamous in cold weather. The whole point of the study was to figure out whether fruit fly monogamy is genetic.

Researchers had noticed that some female fruit flies are monogamous, while others fool around. To test whether this was based on environmental factors or written into their genetic codes, the scientists gathered fruit flies from different climates, bred them for several generations and then exposed them to temperatures warmer and cooler than their great grandparents experienced.

More Junk Science: Men Are NOT Hardwired To Choose Sex Over Food

They found that female fruit flies from monogamous generations became friskier in the cold, and concluded that the behavior was environmental, not genetic. And, in this context, it’s easy to confuse that with “fruit flies are friskier in the cold”, which would have been a decent headline (even though it wouldn’t have captured the real essence of the research). It should be obvious, however, that a fruit fly study has no implications for human sexuality whatsoever.

If you want to prove that women are more promiscuous in the cold—you’re going to have to do better than a fruit fly study. Until then, the claim that human females get friskier in the winter is absolute junk science.