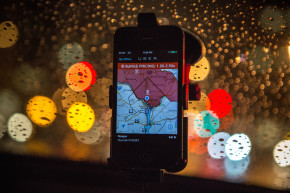 Why Scientists Say Uber’s Surge Prices Are Unfair
By Joshua A. Krisch

Uber’s controversial “surge prices” came under fire this week after a study from Northeastern University suggested that, when Uber inflates the cost of a ride share during peak travel times, it is actually discouraging people from using the service.

“What happens during a surge is, it just kills demand,” coauthor Christo Wilson told ProPublica. “So the drivers actually drive away from the surge.”

Incidentally, the results also helped scientists come up with tips for avoiding surge prices. The study suggests surge prices are set based on strictly-defined zones and that, occasionally, walking five feet away from your current location can substantially lower the price of an Uber. ProPublica used some of that data to build a map of these surge zones for San Francisco and New York City.

Here’s what researchers found, according to the study:

The results paint a complex picture of surge pricing’s impact on supply and demand. On one hand, surge does seem to have a small effect on attracting new cars. On the other hand, it also appears to have a larger, negative effect on demand, which causes cars to either become idle or leave the surge area. Although we cannot say with certainty why surge has such a large, negative effect on demand, one possibility is that customers have learned that surges tend to have short duration, and thus they choose to wait for 5 minutes before requesting a ride. Another possibility is that surging areas may be impacted by adverse traffic conditions, which prevents drivers from flocking to them.

It isn’t easy to conduct an Uber study—the company refuses to release most of its data to the public. Researchers at Northeastern University, however, discovered that the mobile app communicates with Uber’s central server every five seconds. Each ping relates the users’ geolocation to the server, which responds by sending back information about available cars in the area. The researchers simply opened 43 accounts on the Uber smartphone app, spread them throughout San Francisco and New York City, and collated that data into an extensive map of supply and demand throughout the day.

Predictably, Uber contested the findings and issued a statement. “Contrary to the findings in this report, which are based on extremely limited, public data, we’ve seen this work in practice day in day out, in cities all around the world.” In other words, don’t let your science get in the way of the anecdotal evidence.