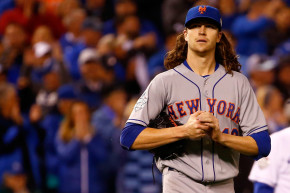 What History Says About The Mets’ World Series Chances

Comebacks like these are rare, but it's not impossible

Underdogs once again. The Mets, who started out as 30-1 longshots on opening day, find themselves in a 0-2 hole at the start of the World Series. The team from Queens is facing a steep climb to their first championship in 29 years.

If baseball history is any indication of what’s to come, it’s going to be a grim World Series for the Mets as they face off with the Kansas City Royals in Game 3 on Friday night. A total of 36 teams have started 0-2 on the road, and only seven (19 percent) of those teams have come back to win. As Sports on Earth notes, these series tend to be short in length too, averaging just 5.4 games.

The importance of stealing one of the first two road games was not lost on Mets manager Terry Collins.

“When you start on the road you go in saying, ‘Look, we’ve got to come out of here 1-1’,” he said after Game 1 on Tuesday night. Indeed, a road team’s odds to win the World Series skyrocket to 45.1 percent after splitting the first stanzas of a series.

The Mets, however, squandered that chance this week and come home a big underdog. That’s nothing new for this squad though.

“We fought back so many times this year that this is just another challenge that we have to meet,” said Terry Collins after Game 2. “And so far, we’ve met them all.”

And you know what? Maybe the stats won’t matter for this Mets team. Superstition is more fun anyway.