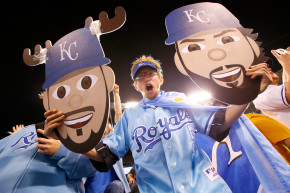 New York is a bigger city, but a larger percentage of Kansas City residents are tuning in

KCMO is not risking any FOMO with this World Series.

A whopping 78 percent of Kansas City residents watched Game 1 of the World Series on Tuesday, compared with just 43 percent of New Yorkers. The ratings dropped in Game 2, but Kansas City still dominated, with nearly 57 percent of homes tuning into the game, compared to just 21 percent in New York.

Kansas City has the 33rd highest market area in the country tuned in. New York fans, on the other hand, perhaps disappointed their team as the Mets have disappointed them for the past decade-plus. Although New York had a fewer percentage of its residents watching, the city is the largest media market in the country.