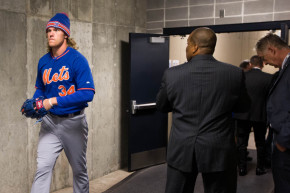 World Series Psychology: Do The Mets Have What It Takes To Win?
By Joshua A. Krisch

World Series Psychology: Do The Mets Have What It Takes To Win?

The World Series of Underdogs continues Friday night with the third game between the New York Mets and the Kansas City Royals. The Royals lead 2-0, but as New Yorkers won’t stop reminding us, it’s still anybody’s Series. (Remember 1986? Mets fans do.)

Is it really, though? The pundits and announcers who so often blather on about motivation and “who wants it more” aren’t entirely wrong. Baseball is about more than just statistics and physical prowess—it’s about psychology too. On Friday, the Mets will be playing with the knowledge that they only have a 17 percent chance of winning the Series, and the Royals will have to contend with the concern that, after a stunning start, they’ll choke and lose it all. And what we know about athletes’ psychology suggests that the behavior of players on both teams will be significantly affected by how the Series has gone so far, in ways potentially both good and bad.

For the Royals, Game Three is looking like the potential continuation of a winning streak—Kansas City has won the past 10 games it’s played. The psychology literature suggests that, for Game Three, the Royals are going to play a cautious, risk-averse game, in hopes of holding onto their lead.

This concept is particularly obvious in gamblers. In a recent study published in the journal Cognition, researchers found that sports betters tend to win more often after they’ve hit a hot streak, which seems like a scientific impossibility. Still, the numbers are hard to deny. After winning twice, the data suggest gamblers have a 57 percent chance of winning and, after three wins, a 67 percent chance. After six wins, the probably of a placing a winning bet jumps to 76 percent.

When the scientists looked closer, they found the source of these “lucky streaks”— gamblers place more conservative bets the more often they win. The researchers concluded that lucky streaks are real, but that we create them by taking fewer risks when we’re ahead.

So the science suggests Kansas City players will likely be risk-averse going into Game Three, and less likely to make mistakes—but also less likely to try for outstanding, risky plays.

The Mets, on the other hand, are facing a bit of a losing streak. If they think about that fact while they’re on the field Friday night, they’re even more likely to keep losing.

Sports psychologist Mike Stadler wrote a book on the complex psychology of a Major League baseball player in 2007. “Baseball turns out to be a good laboratory for studying psychological phenomena,” he once said in a press release, “because you’re pushing the human system to its limits. And that’s a good way to see how the system works.”

While Stadler does not lend very much credence to winning streaks in his book (he points out that every winning streak in baseball history, short of Joe DiMaggio’s 56-game hit streak, can be statistically chalked up to chance) he does recognize the toll that a slump takes on the psyche.

Having just lost two of the most important games they’ll likely ever be in, Mets players will now be tempted to over-think their actions on the field. For example, Stadler told Live Science in 2007, speaking of a hypothetical player in a slump, “He’s thinking about how he’s swinging the bat, and that kind of self-focus really disrupts performance of something that should be a smooth and fluid skill and doesn’t really need that much thought.”

Other sports psychologists have echoed the idea that players in a slump tend to over-think their game in ways that affects it negatively. Rob Gray of Arizona State University once ran a hitting simulation that asked Major League hitters to swing, while focusing on a specific part of the swinging process. He found that thinking about the swing made batters much less likely to hit the ball.

“If we force you to go back and think about each stage of what you’re doing, you actually start interfering with this procedural knowledge, this motor memory, and you start messing it up,” Gray said in a press release. “It’s like tinkering with a machine that’s running really efficiently. You start trying to control everything yourself and it messes it up and it hurts your performance.”