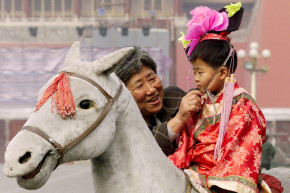 China’s One Child Policy Raised A Generation Of “Little Emperors”
By Joshua A. Krisch

China’s One Child Policy Raised A Generation Of “Little Emperors”

The policy has ended, but the psychological impacts of nation-wide family planning live on

China ended its controversial “one child” policy on Thursday, citing concerns about the country’s aging workforce. The laws that have restricted families in China since the 1970s, however,  left an indelible mark on a generation of Chinese citizens, each of them raised as an only child. In 2013, a study in the journal Science described the unique psychology of China’s so-called “Little Emperors”:

The results suggest China’s one child policy warped the psychology of an entire generation. Compared to Chinese adults raised with siblings, children of the one child policy were found to be more pessimistic and distrustful, more likely to cheat and less interested in competing or taking risks.

The study throws around several reasons for these odd personality traits, but they are largely conjecture. It is possible that parents coddle their only children so much that they grow up avoiding risk and competition and it’s also possible that, without siblings to fight (and negotiate) with, these children never developed some key social skills, such as trust and trustworthiness.

For the study, researchers asked 421 Chinese citizens (half born before the one child policy, and half born later) to participate in several economic “games” that double as sort of personality tests. For instance, to test risk aversion, players were offered 100 yuan and told that they could either keep the money or invest it in a stock that had a 50-50 chance of tripling the sum or losing it all. About 66 percent of children born before the one child policy took the risk, as opposed to only 58 percent of children born after the one child.

Regardless, Stephanie Pappas, writes for Live Science, the one child policy likely stifled at least some of China’s economic growth. “The gap between the pre- and post-policy groups is large enough that researchers would expect it to have real-world effects,” she writes. “The one-child policy could hamper entrepreneurship by producing a relatively risk-averse generation.

Which opens the door to an interesting possibility. When China announced on Thursday that it lifted its one child policy, the government explained that it was doing so to reinvigorate an aging workforce, and that China was desperately in need of young, energetic citizens to pick up the slack. Maybe now they’ll get just that—a new generation of Chinese pundits who will embrace competition and take risks.

…and, of course, fight with their siblings.