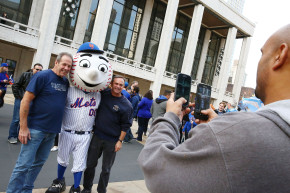 For Mets Fans, A Kansas City Trip Is Cheaper Than Citi Field
By Ryan Beckler

For Mets Fans, A Kansas City Trip Is Cheaper Than Citi Field

As the World Series kicks off this week, New York is taking over Kansas City — well, at least for Games 1 and 2 of the Fall Classic.

Air travel demands from the Big Apple to the Show Me State have ballooned since the Royals won the American League Championship on Friday night. Since then, flight searches from NYC-area airports to Kansas City have increased 57 percent, according to the travel site Hipmunk. That was enough interest for United Airlines to add a last-minute flight to accommodate fans trying to make tonight’s opening game at Kauffman Stadium.

NYC-We added a last minute flight from Newark to Kansas City. It departs at noon ET & we'll take you out to the ballgame.

And it’s no wonder why Mets fans are making the trip out to Kansas City. Tickets for Games 3, 4 and 5 of the World Series, at the Mets headquarters in New York’s Citi Field, are officially the most expensive tickets in baseball history. For New York-based fans of the Amazin‘s, it’s actually cheaper to fly out to Kansas City ($406), buy tickets to Games 1 and 2 ($470) and stay overnight at a nearby hotel ($74, for a total of $950) than it is to make Games 3 and 4 in Queens ($1,082).

With the team coming off a lengthy break (that has no bearing on the series, by the way), Mets fans are aiming to cheer on this underdog-turned-favorite squad to their first championship in 29 years — and they’re taking up a pretty reasonable deal to see the spectacle in person. So get ready, Royals fans, the New Yorkers are coming.