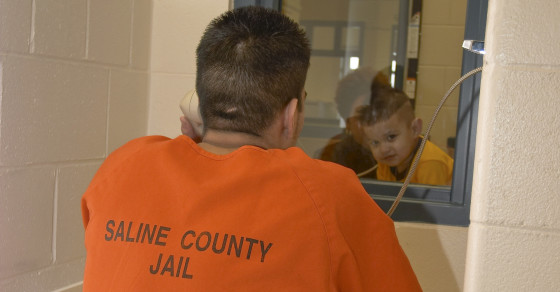 Prisoners Who Do Yoga Become Better Fathers
By Joshua A. Krisch

Yoga isn’t usually an option when you’re facing time behind bars. But yoga courses for imprisoned dads at Chelan County Regional Jail in Wenatchee, Washington, appear to have improved their parenting skills, according to a study published in the Californian Journal of Health Promotion.

More Inmates At One Prison Spent More Than 5,780 Years In Solitary

Scientists from Washington State University found that that prisoners in the study had improved in both the Self Compassion Scale and Whole Person Scale, two tests given by psychologists to determine how people view themselves. Prisoners also improved on a parenting scale developed specifically for the study. Yoga, the authors say, likely helped relax the inmates, so that they become more receptive to other therapeutic exercises.

“I believe the yoga practice helped participants become ready to learn and increased their willingness to try new ideas, absorb new information and begin to apply these in their lives,” said Jennifer Crawford, a researcher at Washington State University and coauthor on the study in a prepared statement.

Researchers arranged yoga and relaxation sessions for 14 groups of inmates over the course of three years, carefully screening all participants to ensure that they were fathers of young children and more or less non-violent. The sessions would begin with an hour-long class on child development, with the goal of impressing upon inmates just how vulnerable and impressionable children can be. Inmates would then participate in a yoga class, taught by an outside instructor. After each session, inmates were encouraged to write about their feelings in journals, to help them reflect on the classes and the yoga sessions.

The results suggest that parenting programs combined with yoga sessions may improve outcomes for prisoners and other high-risk populations.