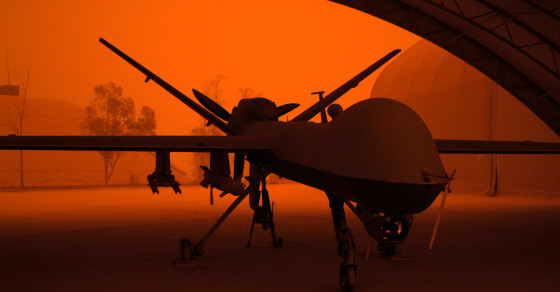 Bad Intel, Kill Chains And Other Shocking Facts From The Drone Papers
By Shane Dixon Kavanaugh

Bad Intel, Kill Chains And Other Shocking Facts From The Drone Papers

The U.S. drone program remains one of the most controversial, deadly and opaque tools used by the White House in its ongoing global war on terror. The unmanned airstrikes proliferated under the Bush administration following the 9/11 attacks and have become President Obama’s preferred method for hunting and killing suspected terrorists around the globe. Drone strikes are credited for picking off top al-Qeada targets like Anwar al-Awlaki, the American-born imam accused by the U.S. of being one of the group’s leaders and masterminds. But they have also been reported to kill hundreds of civilians and other “unintended targets.” After 14 years, the program remains cloaked in secrecy.

More Why the U.S. Drone War Could Last Forever

On Thursday, The Intercept published a series on the American drone program, based on a trove of classified documents leaked by an unnamed source. The series offers a sweeping look into the program. Here are five essential takeaways:

Some of the secret documents offer evidence that the U.S. drone program kills far more people than the White House has publicly acknowledged. A report on Operation Haymaker, a special operations campaign in Afghanistan, showed that nearly 90 percent of people killed in drone strikes during a five-month period of that campaign were not the intended targets. It also showed that between January 2012 and February 2013, U.S. special operations airstrikes killed more than 200 people. Of those, only 35 were the intended targets. The findings, The Intercept argued, contradict repeated claims by the White House and the Pentagon that drone strikes are precise and yield few civilian casualties.

The U.S. military relies heavily on so-called “signals intelligence,” such as metadata from phones, computers and communication intercepts, to carry out targeted drone strikes in countries such as Somalia and Yemen, documents show. However, these documents also acknowledge the limitations of such tools. “These sources,” one classified study obtained by The Intercept notes, “are neither as timely nor as focused as tactical intelligence” from interrogations or seized materials. The study also characterized the ability to gather signal intelligence as “poor” and “limited.”

According to the leaked reports, the U.S. military labels any person killed in a drone strike as an EKIA, or “an enemy killed in action.” This includes people who were not intended targets of a strike. While not stated in the documents, it is possible that some of these designated EKIAs are women, children and other civilian casualties, The Intercept suggests.

There’s been much speculation over the years about the actual bureaucracy behind the U.S. drone program and how individual strikes are actually approved. That’s now been laid to rest, thanks to a slide contained within the leaked cache, which includes a flow chart documenting the chain of command behind a drone strike. A key takeaway from the leaks: President Obama personally approves each intended target, but does not necessarily approve each individual strike.

5. “The Tyranny of Distance”

Geography can have a profound effect on how the U.S. carries out a drone strike, some of the leaked reports suggest. Declared war zones such as Afghanistan and Iraq, which have U.S. military bases, allow the U.S. to gather better intelligence and carry out drone attacks with more regularity than others such as Somalia and Yemen. In those places, the U.S. is unable to conduct full-time surveillance of targets and must jump through more hoops to obtain approval for a drone strike, according to a leaked study by the Pentagon’s Intelligence, Surveillance, and Reconnaissance Task Force, which ascribes the limitations to “the tyranny of distance.”