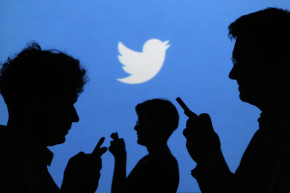 The Rise Of Trump Told Through Tweets Of Losers (Journalists)

It’s often easy to forecast a politician’s short-term arc by sifting through pundits’ tweets. But making sense of Donald Trump’s campaign in that manner is nearly impossible. Journalists are all over the map when it comes to The Donald. Trump is over. Trump’s just getting started. Trump’s finally turning into a real candidate. He’s a threat to the natural order. He’s a joke.

To discover patterns in how journalists’ perceptions of Trump have evolved during his campaign, Vocativ analyzed nearly 100,000 tweets from 75 of the most influential political journalists on Twitter, based on a list created by StatSocial.

Trump couldn't possibly have gotten from Neil Young to play "Keep on Rockin in the Free World" at his rally, did he??

Take, for example, Mark Leibovich, who in his New York Times Magazine profile of Trump admitted he initially refused to write about the real estate mogul, assuming the Donald dramedy would die down quickly. Leibovich was finally forced to accept that the newly minted politician “is not going anywhere” and pitch up one of the most-shared profiles of his campaign, right when things got serious. Leibovich was joined by others in an arc of denial, then concern, then curiosity (tinged with outright panic). Some on the left ignored Trump entirely, others embraced his traveling circus.—nearly all would come to treat his campaign with gravitas in time.

Dear @realDonaldTrump, Thank you for running for president. We needed this. Sincerely, the media. https://t.co/1PcMudE1i3

Based on the data, we’ve broken down Trump’s campaign into three acts.

When Trump announced his campaign on June 16, voices from the left formed a chorus of celebratory, even welcoming laughter. The left saw his candidacy as a joke, some flash-in-the-pan comic relief at the start of a long trudge towards the election. They saw great mileage in a buffoon‘s attempt at relevancy. Pundits with a right-wing following, on the other hand, were far more even in their approach. Some expressed disgust, but a greater proportion took a fair and balanced approach to discussing Trump. A professional civility was maintained by many journalists upon whom Trump would soon launch vicious attacks for treating him unfairly.

.@JamesRosenFNC on @realDonaldTrump’s announcement: “He speaks in a language people understand.” #KellyFile

Settle down, son. Nominee won't be Trump, but we've got to keep him in the race to keep talking about immigration. https://t.co/8HNz9OQkbe

The Trump show settled down for a few days after his announcement, his initial disparaging remarks about Mexicans and his inane ramble about air conditioning and ISIS. The calm wouldn’t last. NBC, Macy’s and Serta all promptly cut business ties with Trump over the Mexican remarks, sparking a national debate about immigration and the first wave of “campaign-killer” comments, predicting his big mouth would bring about his demise. Commenters on the right defended Trump or stayed neutral, reporting on the developments. But commenters on the left mounted a huge tweet explosion, jumping on Trump at the first demonstrable sign of weakness, reveling in an attack which cut to the very core of his very being—the art of the deal.  At this early stage, after all, if the campaign threatened to end Trump the businessman, what would he have when it all ended? Could he afford to go all in and lose?

Sure, Trump has been a troll for decades, but in June, American citizens realized that he would continue to attack “losers” as a candidate and, most likely, if elected President.

On June 11 thousands showed up to see him speak about immigration in Phoenix, marking a shift in his status. The speech was a broad, off-the-cuff ramble, with plenty of digs at his opponents and the establishment in general. The show of support surprised pundits on the left, who either couldn’t believe that Trump could draw such a crowd or that his messages on immigration resonated with so many Americans.

Wow. Trump got 9,000 people to show up for an anti-immigration rally in Arizona. https://t.co/epUk2PXzt2

Tweets from this period show that many left-supported commenters didn’t still didn’t buy into the hype or show concern for any lasting impact. Arianna Huffington highlighted that the Huffington Post would only cover Trump in their entertainment channel instead of alongside other political coverage.

Like a child that can’t differentiate between good and bad attention, Trump increased his trolling, and zeroed in on his fellow Republicans. He gave out Sen. Lindsey Graham’s cell phone number live on TV and challenged Sen. John McCain’s military heroism. Trump told a crowd in Iowa that he preferred “people who weren’t captured” to losers like the Senator, who was held as a prisoner of war. This stoked the right into a twitter frenzy. Some on the right, like Red State blogger Erick Erickson, thought he should apologize. Fox’s Stephen Hayes called him a disgrace. Pundits with mostly left followings, like MSNBC’s Lawrence O’Donnell, thought attacking such a Republican leader and military hero was beyond the pale, and again, it was described as a campaign killer.

.@realDonaldTrump @MittRomney Has your team explained that you must apologize to @SenJohnMcCain or your campaign is over?

But as the first GOP debate loomed, more polls showed Trump at the top, guaranteeing his golden combover would glow at center stage. Just over a month before, journalists were giving him advice on how to hang in there long enough to make it to the debate. But by now some on the right were beginning to think, ya’know, this might actually be happening. Candidate Trump could be a thing. Could President Trump could be a thing?


Peak Trumpmentum began with the Fox Republican presidential debate spurring a greater volume of tweets from the journalists we tracked than at any time to date. While the event was hosted by a right-leaning channel, left-supported pundits flooded feeds with Trump-related tweets. Many of the tweets from the left were jabs and jokes (still plenty of commentary about his hair and skin tone), but there was plenty of serious commentary about Trump and his effect on the race. Ezra Klein tweeted a Vox article about the “shockingly insightful comment” and Matthew Yglesias tweeted his article about the only good policy idea of the night coming from Trump. Leftist pundits were also especially interested in the Trump-Megyn Kelly feud, calling him a bully and her a winner. The tone had shifted again. And it was less confident that everything would go back to normal once the show ended.

After the debate, tweets from the left tapered off as the right wing amped up with post-debate analysis.

Does @realDonaldTrump have a plan to destroy #ISIS? Rob O'Neill @mchooyah is here -OTR #greta @FoxNews

A Trump Education for the Establishment https://t.co/aINOy1hCdv

Trump tweets spiked again after Mexican-American journalist Jorge Ramos confronted Trump during a press conference and both sides weighed in equally, with the right calling Ramos a fool and the left both defending and attacking Ramos’ approach. Another spike followed when Rolling Stone published a feature story on Trump which included offensive remarks that Trump made about his opponent Carly Fiorina. The right had much more to say about the sexist comments than the left. Many defended Fiorina and her response to Trump, and seemed to think this could actually be Trump’s first big mistake.

Trump-related tweets during the second GOP debate, hosted by CNN at the Reagan Library, set records. But this time more came from the right than from the left. The left-wingers seemed to lose interest just as the right was building steam. Perhaps with a left-leaning network calling the shots, the right paid more attention, as watchdogs over how their party line might be distorted.

Both sides, however, agreed that Trump lost this match. On the left, Matt Taibbi said Trump “got bloodied” and Ezra Klein mused that while the first debate focused on Trump, this one focused on an area in which Trump is not as well-versed—actual issues. The right bared their teeth, with plenty of negative sentiment vented in Trump’s direction. While Trump’s past squabbles with Megyn Kelly and John McCain didn’t seem to anger many conservatives, his lunges at Fiorina got under a lot of right-wing skin. Some conservative pundits–especially those who gained popularity with the rise of the Tea Party–started denouncing Trump’s performance and calling him a loser.

Trump says “I will take care of women.” We need taken care of? #GOPDebate

That Trump/Fiorina exchange should be devastating for Trump. She was class & dignity; he was Trump.

In the aftermath of the debate, pundits were scattered and muddled. Trump kept Trumping—refusing to correct a supporter who called Obama a Muslim during a rally, and engaging in a second short-lived battle with Fox—but he was making more of an effort to legitimize his candidacy by releasing his tax plan. The right didn’t know what it all meant. Is Trump leading Republicans down a rabbit hole? Do dropping polls mean Trump is fading ? Are Fiorina, Marco Rubio, Ted Cruz and Ben Carson catching up with Trump. Is Trump the ultimate loser?

The left kept laughing and seemed fairly certain what it all meant: The twilight of the Trump. Arianna Huffington tweeted out her story The Beginning of the End for Trump: His Sarah Palin Moment. Matthew Yglesias was disappointed when Trump released his tax plan, announcing that Trump had sold out and broken his heart, but Matt Taibbi seemed to think that Trump was finally losing it, nearing a Travis-Bickle crackup. The end was certain, but would he fizzle or go out with a grand finale–an illuminated, colorful explosion of insanity?

A month on, Trump endures, but has been finally knocked out of top spot in the Iowa polls. Trump Twitter remains an unpredictable place, as he begins to attack Ben Carson (the intern did it!) and hints that his next target are the voters themselves, who have deigned to bump him into second place. While Trump’s not center stage at the third debate, he remains headline news where ever he goes.