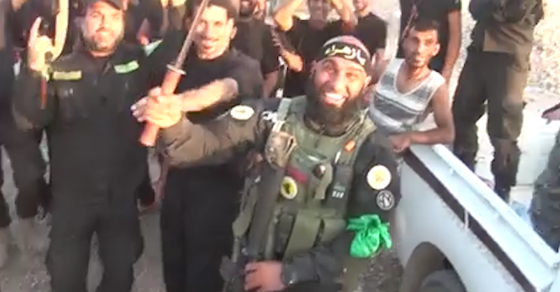 Abu Azrael, the Iraqi folk hero and possible creation of Iranian propaganda, vowed to punish Saudi Arabia over its war in Yemen

Abu Azrael, the axe-wielding “Angel of Death” hellbent on butchering ISIS militants, has turned his tough talk and hulking frame toward Saudi Arabia.

In a video released Thursday, the Iraqi folk hero threatened to pulverize the oil-rich kingdom over its brutal war against the Houthi rebels in Yemen, which the Saudis launched back in March. Abu Azrael made the threat in his home country, flanked by a visiting delegation of Houthi “mujahideen.”

VIDEO: Abu Azrael threatens Saudi Arabia (#KSA) in a video with a #Houthi delegation during their visit to #Iraq. pic.twitter.com/AVQIxhSRz7

“We tell Saudi Arabia we’re coming to you from Yemen or wherever. It doesn’t matter,” said the beefy commander, who is purported to head the Imam Ali Brigade, an Iranian proxy group fighting in Iraq. The Houthis, who belong to a strand of Shiite Islam, are a group of tribesmen largely based in Yemen’s north. They too, are believed to be operating as proxies for Iran, the regional rival of Saudi Arabia, which is predominately Sunni.

Abu Azrael finished the 13-second taunt with “Illa Tahin,” his signature catchphrase. It translates to “into flour,” meaning, he will pulverize his enemies, turn them into powder.

More Angel Of Death: Iraqis Cheer Their Champion Against ISIS

A symbol of Iraqi Shiite resistance against ISIS, the so-called “Angel of Death” became a cult figure in Iraq after waging a joint military assault by Iraqi forces and Iranian-backed militias against the Islamic State early this year.

Iraqi social media users quickly created tribute Facebook pages to him and began circulating images of Abu Azrael holding axes, waving swords, and abusing the corpses of ISIS fighters. There are also music videos and cartoons celebrating him, and he has appeared in regular television interviews with giddy anchors and smiling politicians.

Some have speculated that Abu Azrael is the creation of Iranian propaganda.