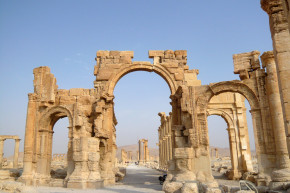 ISIS Is On A Mission To Erase History. And Sadly, It’s Succeeding
By Jamie Tarabay

ISIS Is On A Mission To Erase History. And Sadly, It’s Succeeding

The oldest Christian monastery in Iraq that ISIS razed to the ground is but one of the many archaeological tragedies wrought by the terrorist group. ISIS’ campaign to eradicate religious and historical artifacts in the areas it conquers in Iraq and Syria has achieved a scale of cultural destruction that may not have been seen since the Mongol campaigns.

St Elijah’s Monastery in Mosul had stood for 1,400 years and had been used even recently by US troops when it became part of a military base after the 2003 invasion. Experts concluded that the monastery was destroyed sometime between August and September 2014, after ISIS had taken over the city of Mosul.

Last year the group blew up the 2,000-year-old Arch of Triumph in the Syrian city of Palmyra. Before that, ancient stelas and ruins. ISIS has sought to simply erase anything it finds inconsistent with its unflinching extremist interpretation of Islam. It considers Christians, Jews, and members of other branches of Islam, including Shiites, Yezidis and Sufis, heretics and apostates. It also rejects idolatry and adornment of any kind, and opposes tombs and shrines, believing that they turn the dead into objects of worship. As a result, the group has had no compunctions about destroying not just ancient pagan sites, but also churches and even mosques and other Islamic sites that don’t fit with their rigid ideology.

Destruction isn’t its only agenda, though. ISIS has been tapping into a preexisting international network of looters, smugglers and dealers, and industrializing it, turning these antiquities into a funding source.

The damage that ISIS has done across ancient sites in Iraq and Syria is so extensive that experts at UNESCO admit they haven’t been able to track it all. But at the very least ISIS has destroyed dozens of places and artifacts that are either UNESCO-listed heritage sites or important religious shrines in just over a year. Here’s a look at some of them: