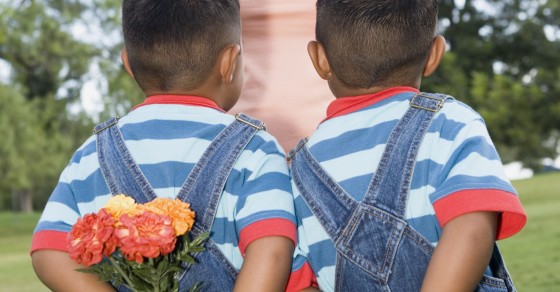 Study Shows Beauty Really Is In The Eye Of The Beholder
By Joshua A. Krisch

Study Shows Beauty Really Is In The Eye Of The Beholder

Nurture, not nature, determines who we find attractive

Feel free to blame genetics for your own looks, but know this—your DNA has virtually nothing to do with whom you find attractive. In a new study published in Cell Biology, researchers found that even identical twins often disagree over which faces are the most attractive. The findings suggest that our perception of attractiveness and sexiness is largely based on our own experiences, not some natural scale of human beauty.

There’s a lot of science backing the general notion that we’re wired to find some people sexy. Studies have shown that humans are naturally attracted to symmetrical faces because that suggests more robust DNA, and neuroscientists have even determined that there’s likely an evolutionary basis for men loving breasts. The implication, however, is that DNA drives most of our attractions, which always left one burning question—why do some people seem to have such different standards of beauty?

Now, scientists think they’ve figured out part of the answer, and it’s astonishingly simple: our standards of beauty are not genetic. Sure, most of us can agree that the most attractive people are pretty and that ugly people are less attractive, but for everyone in the middle, it looks like nurture beats nature.

For the study, researchers first surveyed 35,000 volunteers via an online quiz that shows participants faces and asks them to rank each on a scale of one to seven. They found that, more or less, everyone agreed that certain faces were “Very Attractive” and that others were “Very Unattractive” but, predictably, found a lot of variation when it came to the middle categories.

Our standards of beauty are likely due to a combination of factors, the scientists say, including the movies we watch, the people we interact with and, yes, a dash of genetics. But the confusing science behind beauty is far from solved. Step one would probably involve figuring out why we’re attracted to other people in the first place—and, with this study, everything just got a little more complicated.