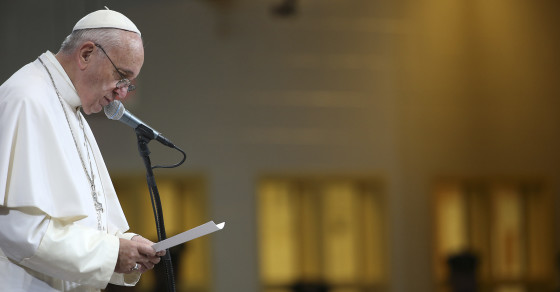 By The Numbers: The Catholic Church’s Sex Abuse Scandals
By Sarah Kaufman

By The Numbers: The Catholic Church’s Sex Abuse Scandals

On the last day of his trip to the U.S. Pope Francis finally met with victims of clergy sexual abuse

It took visits across 15 countries and the last day of his trip to the U.S. before a traveling Pope Francis met with survivors of sexual abuse by the clergy, calling them “true heralds of mercy.”

“God weeps for the sexual abuse of children,” Francis said in Philadelphia, after meeting with hundreds of bishops and seminarians as well as privately with victims of clergy sexual abuse. “I am overwhelmed by the shame that people who were in charge of caring for those young ones raped them and caused them great damages.”

“Humbly, we owe each of them our gratitude for their value as they have had to suffer terrible abuse,” Francis said. He had previously met with victims 15 months into his papacy at the Vatican, but has largely avoided the issue, to the consternation and unhappiness of survivors. In remarks to bishops and clergy in the U.S. that fueled the indignation, he told them they had “suffered greatly in the not distant past by having to bear the shame of some of your brothers who harmed and scandalized the Church in the most vulnerable of her members.”

The Catholic Church has come under severe scrutiny and criticism as the scandal of sexual abuse by members of the clergy continues to roil the institution. Only this year, Pope Francis has already had to accept the resignations of three American bishops while a Pennsylvania priest was found guilty last week of sexually abusing three boys at a Honduran orphanage.

The numbers behind the Catholic Church’s sex abuse scandal are only climbing as more victims come forward.

That’s how many credible cases of abuse had been referred to the Vatican from 2004 to 2014, according to the Vatican’s U.N. ambassador in Geneva, Archbishop Silvano Tomasi. There were an estimated 410,000 Catholic priests around the world in 2014, the Catholic News Service reported.

2,572 priests sentenced to a lifetime of penance

Another 848 over the last decade had been defrocked, according to Tomasi. The others were sentenced to penance and other mild religious sentences.

The former Pope, who resigned in 2013, essentially fired 384 of those priests in the last two years of his pontificate.

Majority of priests’ victims were male

American Catholic priests were shown to have a distinct pattern of sexual abuse, with 64 percent of all allegations of abuse made against a priest by a male only, according to a detailed report by the John Jay Institute investigating child abuse in the Catholic Church from 1950 to 2002. Those males were young: more than 85 percent of them were 8 to 10 years old.

That’s how much the Catholic Church in the U.S. spent between July 2013 and June 2014 on costs “related to child protection efforts and to allegations of clergy sexual abuse of minors…” according to an annual survey by Georgetown University’s Center for Applied Research in the Apostolate (CARA).