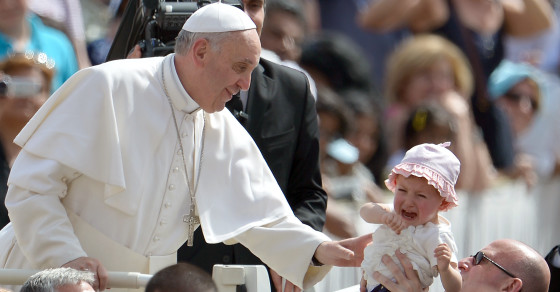 Scientists To Pope Francis: Condoms Will Save The Planet
By Joshua A. Krisch

Scientists To Pope Francis: Condoms Will Save The Planet

One thing stands between Pope Francis and true environmentalism: condoms. While the Pope has been outspoken on climate change, and seemingly in sync with (most of) the best available science, his views on family planning, of all things, rob him of true environmental credibility, according a large group of well-respected academics.

What kind of world do we want to leave to those who come after us, to children who are now growing up?

Pope Francis agrees we need to curb emissions because, as countless studies have shown, as the planet gets warmer the poor are the first to suffer. But climate scientists say all that means next to nothing until the world–and the Pope–gets serious about contraception.

More Pope Francis Is Not Our First Science-Friendly Pope

Why? “Demographic growth is not compatible with…a sustainable environment,” write scientists Paul R. Ehrlich and John Harte in an opinion piece published in Nature Climate Change. “Pope Francis needs to heed his own comments on the Church’s ‘obsession’ with contraception and abortion, and assume a leadership position in support of women’s rights and family planning,”

In short, more people making more babies means more pollution. “Multiple studies have shown that humans are the major cause of climate change. Controlling the global population, then, through contraception and family planning, is one of the most important strategies that we have for curbing emissions. More babies translate into more cars on the road, more forests converted into farmland, more water pumped into cities and more raw materials mined for consumers—all key processes involved in global warming.

And yet, the Pope vehemently opposes contraception. Even in his ostensibly pro-climate encyclical, the Pope explicitly spoke out against the birth control strategy touted by scientists. “Some can only propose a reduction in the birth rate,” he said. “To blame population growth instead of extreme and selective consumerism on the part of some, is one way of refusing to face the issues.”

On this point, the best available science suggests that the Pope is dead wrong. Studies have shown that providing contraception services and education for the 225 million underserved women around the world would cut carbon emissions more than any sort of renewable energy initiative.

But Ehrlich and Harte take it one step further, arguing that the Pope’s position is almost harmful as denying climate change altogether. “Focusing on only half the source of, or half the potential solution to, a complex problem can be nearly as ineffective as ignoring the problem,” they write.

One of the central problems with the Pope’s thesis is that it hinges on many world leaders abandoning self-interest and converting into benevolent climate champions. “Only by cultivating sound virtues will people be able to make a selfless ecological commitment,” the Pope said in his encyclical. But social scientists say this is unlikely, and that it is dangerous to build climate policy around Church values that promote the common goodness of all mankind.

“The powerful interests that are opposed to genuinely restoring ecological balance and seriously dealing with global poverty need to be defeated through political confrontation, rather than simply converted to a more compassionate, ethically grounded mindset,” writes Eric Olin Wright, former president of the American Sociological Association, in a separate opinion piece for Nature Climate Change. “We need more than moral conversion.”

Now, it’s definitely a good thing that the Pope is concerned about climate change. But if the Pope is determined to oppose good climate strategy at every turn, and encourage his 1.2 billion followers to do that same, that’s a major problem. Because the only thing worse than a climate denier is someone who appears scientific, acknowledges climate change, and then tells everyone to ignore the scientists when they propose ways to prevent disaster.