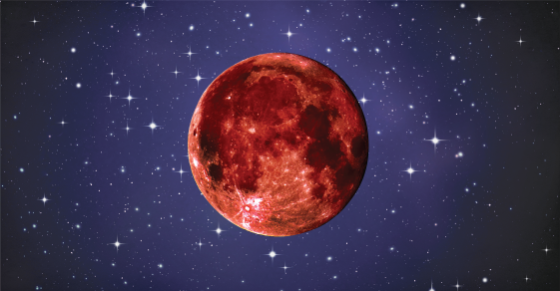 The Blood Moon Will NOT Herald The Apocalypse
By Joshua A. Krisch

The Blood Moon Will NOT Herald The Apocalypse

This weekend's Blood Moon is just a routine supermoon lunar eclipse. But try telling that to conspiracy theorists...

The Blood Moon will hover low on the horizon this Sunday evening, offering stargazers the last clear view of the deep red harvest moon for nearly two decades. Scientists say the Blood Moon is a relatively common astronomical event—a stunning combination of a lunar eclipse and a harvest moon or supermoon. Conspiracy theorists, however, prefer to cite the prophet Joel:

The sun shall be turned into darkness, and the moon into blood, before the coming of the great and terrible day of the Lord.

Not that we have anything to worry about. Humanity has already survived no less than five Blood Moons since the year 1900. But it’s still an exciting astronomical event.

Total lunar eclipses (when the Earth passes between the sun and the moon) only happen about once every year, and supermoons (when the full moon appears during its closest point to Earth) only happen about four times per year. Blood Moons require the supermoon to coincide with a total lunar eclipse. The odds on that happening are pretty slim—the last Blood Moon was in 1982, and the next one won’t be until 2033.