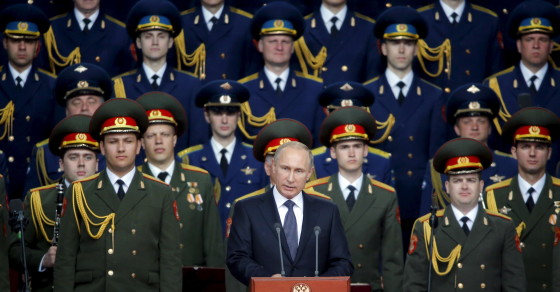 The first satellite images showing what appear to be Russian military sites in Syria preparing to receive an influx of forces have been released.

In an aerial view dated September 13 this year, two sites near Syria’s Latakia airport show construction around new buildings, and tents that appear to be of the same type used by Russian military units, according to IHS Jane’s Intelligence Review. The construction at the Istamo weapons storage complex and the al-Sanobar military complex has been augmented by a substantial increase in fast jets on the nearby runway, IHS Jane’s said.

The White House has said it doesn’t know exactly what Russian President Vladimir Putin’s intentions in Syria are. “We’ve made clear both in public and private that doubling down on supporting (Syrian President Bashar) al-Assad is a losing bet,” White House Press Secretary Josh Earnest told reporters Monday.

“These new discoveries highlight how the rapid build-up of Russia’s expeditionary force in Syria is continuing apace, giving it a significant capability to target rebels opposed to the Syrian government and to secure the Latakia homeland of President Bashar al-Assad,” IHS Jane’s said in an official statement Tuesday.

A separate photo of dozens of Russian jets that made the rounds on Twitter Tuesday was confirmed to have been taken in Latakia by Eliot Higgins, an open source investigator.

#Syria : Supposedly first pic of Russian jets on ground from the ground at #Latakia airport pic.twitter.com/bTZ5jU6tgF

Other satellite photos of the Assad International Airport from AllSource Analysis showing Russian military aircraft and similar construction activity in Latakia were published earlier this month.

The ramp-up doesn’t necessarily mean an all-out Russian offensive. Russia could be “keeping its options open,” IHS Jane’s hypothesized. Russia might not “prop up the Syrian regime at any cost, and may even be preparing its contingencies for the eventual downfall of President Assad.” Vladimir Putin is expected to lay out his plan for the region at the United Nations General Assembly on September 28.