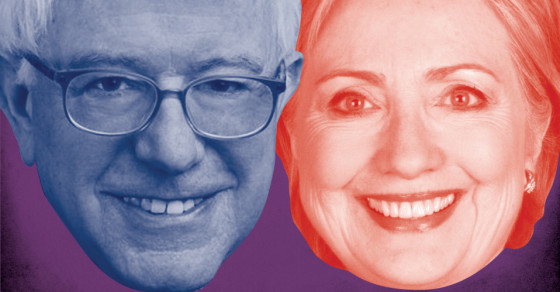 Bernie Sanders left Hillary Clinton in the dust on Twitter during the GOP debates. Sanders has gained almost twice as many Twitter followers as Clinton in the days surrounding Wednesday night’s Republican debate.

Sanders has gained 68,427 followers since Tuesday, while Clinton amassed 36,592 in the same time frame, according to Twitter Counter. The bump was needle-moving for Sanders, who has just over 526,000 followers, while Clinton has 4.26 million. The Vermont senator, who live-tweeted the debate using the hashtag #DebateWithBernie, has just about 12 percent of the Twitter following Clinton does.

Sanders’ individual tweets garnered more favorites and retweets than most of Clinton’s tweets did on Wednesday night. The Vermont senator received an average of 9,000 favorites for his tweets about the debate, while Clinton had an average of around 4,000, Vocativ calculated. Sanders’ most popular tweets, with approximately 21,000 favorites each, turned out to be jabs at Republican candidates Jeb Bush and Donald Trump. He tweeted once every eight minutes on average, blending snark and frustration.

Trump: "I will take care of women." Really? What about respecting the right of women to control their own bodies? #DebateWithBernie

Sanders won the night on Facebook too, writing the most widely shared Facebook post of any presidential candidate. It garnered over 188,000 likes and 38,000 shares. “The evening was really pretty sad,” the post started, before slamming Republican candidates for getting their positions on every issue “dead wrong.” The post smashed every Republican candidate on Facebook (the most shared Facebook post from a GOP candidate—it was Ben Carson’s—got 128,000 likes and 8,700 shares), and it also overtook Clinton’s Facebook presence, whose most liked post during the debate had just over 56,000 likes.