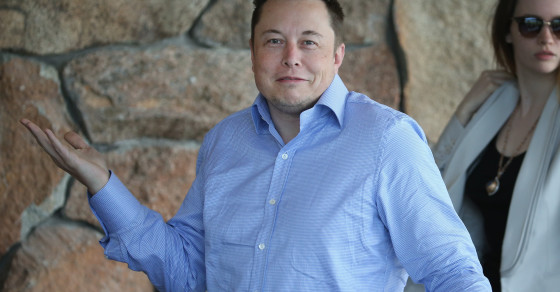 Elon Musk Wants To Wrap The World With Space Wifi

SpaceX founder Elon Musk wants to put 4,000 satellites into space to give wireless Internet access to 60 percent of the world still living without it.

Musk’s company has lodged a request with the Federal Communications Commission to begin testing the technology as early as next year. SpaceX will test whether the satellites, launched into low orbit, are capable of beaming a connection to devices back on earth.

That would almost quadruple the number of active satellites already circumnavigating the globe. In March 2014, there were 1,100 government and private satellites happily orbiting the earth, beeping away, along with another 2,600 that no longer function. Space is already pretty crowded. Another 4,000 celestial bodies would add to that.

There are 1,200 satellites orbiting earth, but 23,000 catalogued 'objects' of various sizes to contend with, according to recent estimates.

The formal request comes after both Google and Facebook scrapped similar plans to pioneer uninterrupted, worldwide wireless Internet access for all. That said, Musk has a leg up: He plans to use record-breaking Falcon Heavy rockets, which SpaceX built with the help of NASA, to launch the satellites as early as five years from now.

The idea, if it becomes reality, would revolutionize how the internet is distributed, but will be an uphill battle.

A venture backed by Virgin founder Richard Branson is already in motion, and believes it can provide a similar level of wireless Internet access with just 900 satellites, costing up to $3 billion. OneWeb owner Greg Wyler has also acquired the international wireless spectrum rights to provide Internet service from space, Branson told Bloomberg.

Branson wants Musk and Wyler to join forces, but Musk’s not having it. He told the magazine his technology will be more “sophisticated” and insisted there is room for two competitors. Which means that while man has already walked on the moon, the space race is still going strong in 2015.