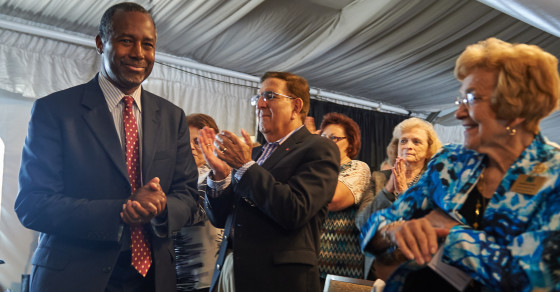 Trends data shows that people are basically only Googling Trump, Carson and Fiorina. Nobody else registers.

A Vocativ analysis of Google Trends data shows that voters are now far more curious about Ben Carson than they are about Jeb Bush. Going into the second Republican debate, the front runners have done a quick second-place switcheroo in Google Search rankings.

Since August 6, Ben Carson has replaced Jeb Bush as the second-most-searched candidate on Google across the U.S., behind Donald Trump, who retains the ‘most-Googled’ mantle by a large margin. In the latest map by Google Trends, Carson holds second place on Google in more counties than any other candidate.  That mirrors data from the latest New York Times poll, which showed Republican candidate Carson was almost neck-and-neck with Trump, with 23 and 27 percent of Republican primary caucus voters respectively choosing them as the preferred candidate. Bush trailed behind with 6 percent.

Before the August 6 debate, Carson was the second-most-Googled candidate in only 286 counties on the United States map out of 3,143, according to data compiled by Google Trends and sent to Vocativ. Ahead of the CNN-hosted republican debate on Wednesday, Carson was the second-most-searched candidate in 1,281 counties — that’s almost 4.5 times as many counties as a month ago. Light blue in the map below represents people searching for Carson:

Second-Most-Googled Candidate Per County Since August 6

Two of the biggest losers in the race for second place have been Jeb Bush and Scott Walker. Walker was first-searched in 58 counties, but that dropped to 27 in the most recent map, and second-searched in 224 counties, which dropped to 99. Walker had been a notable holdout ahead of the first debate, with his home state a solid island of yellow amid a nation of Donald Trump red in the Google Trends map. Jeb Bush was second-most-Googled in 727 counties before the first debate, but that has plummeted to just 151 counties as Ben Carson soaks up the national attention. In percentage terms, 80 percent of the people who Googled Jeb Bush last time didn’t do it again this time, while Bobby Jindal lost 86 percent of the meagre interest he attracted back in August.

Carly Fiorina, on the other hand, saw a 400 percent increase in interest after her stellar performance at the “children’s table” debate, clocking in at second-most-searched in 319 counties, up from just 64 ahead of the first debate.