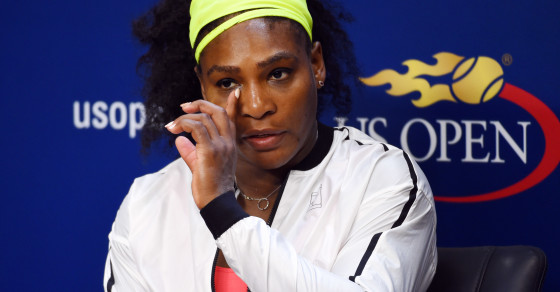 It’s Over! How Serena Williams’ Win Streak At The US Open Stacked Up
By Brian Patrick Byrne

It’s Over! How Serena Williams’ Win Streak At The US Open Stacked Up

It's far from the longest

The upset of Serena Williams in the semi-finals of the U.S. Open, by Italy’s unseeded Roberta Vinci, marks her first loss in Flushing, N.Y., since 2011. But Williams’ 26-match win streak, impressive as it is, is not nearly the longest in tennis.

Williams, now 33, has had a remarkable run recently. She’s been even more dominant in her late 20s and early 30s than she was in her early 20s, which is typically when players hit their stride. In the runup to the U.S. Open, some pundits were anointing her as the best women’s tennis player ever.

More The Surprising Fact About The Williams Sisters’ Rivalry

Williams’ loss to Vinci on Friday is only the second time in 67 matches that she has fallen to a player at the U.S. Open who isn’t ranked in the top 10. Her only other such loss was to Belgian Kim Clijsters at the semi-finals in 2009.

The defeat also breaks Williams’ Grand Slam winning streak, ruining her chances of becoming the first player in 27 years to win all four Grand Slam tournaments in a single year. Had she won this year’s U.S. Open, she would have been the first female singles tennis player to do that since Steffi Graf in 1988.