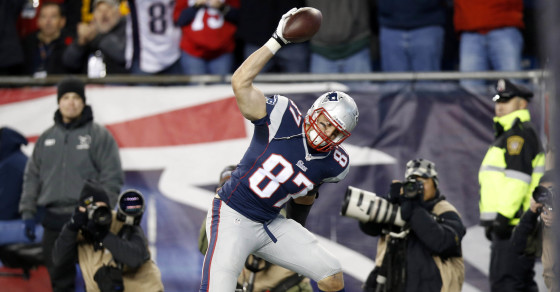 Before the New England Patriots and Pittsburgh Steelers kick off another NFL season at Gillette Stadium on Thursday night, all 32 teams will be cashing in on their bevy of national television contracts. This year, each team can expect a $155 million cut of the massive $4.95 billion TV rights pie, a total greater than the national TV contracts of the MLB, NBA and NHL combined.

When the fledgling NFL and AFL had a combined total of 21 teams in 1960, the leagues signed separate television deals worth a total of $2.4 million a year (adjusted for inflation, that’s $19.4 million today). As the NFL’s popularity grew throughout the 1960s, and when more than 50 million people tuned in for the very first Super Bowl simulcast on CBS and NBC in 1967, TV networks started to pony up huge amounts of cash for the broadcasting rights of one of America’s fastest growing sports. By the time the league’s merged and Monday Night Football debuted in 1970, NFL games quickly became one of the hottest properties in television.

The Meteoric Rise In Value Of NFL TV Contracts (in millions, adjusted for inflation)

Fast forward to today and the NFL has individual deals worth north of $1 billion a year with CBS, FOX and ESPN that run through 2022. The smallest deal among the major networks belongs to NBC, in which it’ll dole out an annual $950 million for Sunday Night Football rights. For comparison, that’s still almost five times the $200 million the network pays the NHL each season.

The league’s next media frontier – streaming games online – guarantees to be even more lucrative for the NFL and its owners. Yahoo reportedly paid at least $20 million to obtain exclusive streaming rights to the Jacksonville Jaguars’ game against the Buffalo Bills on Oct. 25 — take that amount multiplied over a 256-game season and outlets can expect a price tag of around $5 billion per year.

Total Value Of NFL Contracts By Network Since 1960 (in millions, adjusted for inflation)