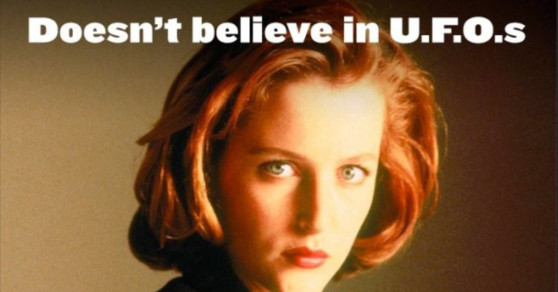 San Francisco-based designer Shaun Osburn woke up on Wednesday and realized he had created what is fast becoming the most popular Kim Davis meme.

Osburn had been watching episodes of The X Files with his partner Michael Vilayvong on Tuesday night when the topic of Davis came up. They got to discussing the concept of personal beliefs and the role they played in the Kentucky clerk’s decision not to issue marriage licenses to same-sex couples. Vilayvong pointed to the screen and said “Scully doesn’t believe in U.F.O.s,” to which Osburn replied, “But yet she does her fucking job!”

More A Brief History Of Kim Davis Vs. Gay America

And the best Kim Davis meme was born:

Osburn hopped onto Photoshop and quickly mocked something up to share with friends and family online. He posted it to Facebook and saw that a few friends had liked and commented on it by the time he went to bed. The next morning there were a few hundred shares and friend requests from people he has never met. In a little over a day, the post has garnered over 5,000 likes and been shared almost 17,000 times. Even Dana Scully, aka actress Gillian Andersen, is a fan, retweeting the image with the comment “Brilliant!”

“As soon as I saw the notification from her on my phone I started crying. I was, and still am, a huge sci-fi and horror geek,” Osburn told Vocativ. “I had to run to the restroom at work to read it, because I knew I would cry. Even just a one-word response from her meant everything to my inner 12-year-old faggot nerd self.”

Like other great memes before it, people have been busy making their own versions (to his knowledge, Osburn’s was the first) of the Davis meme, pulling in Ghostbusters and Fabio’s old I Can’t Believe It’s Not Butter ads.

Osburn credits the meme’s popularity to the fact that it’s not directly mean-spirited—others in the past few weeks have focused on Davis’ appearance and clothing—but criticizes the theatrics of Davis’ recent behavior.

“I get that it’s a difficult subject for some Christians. It’s hard to argue with ‘My eternal soul is at stake,'” Osburn said. “That being said, I believe she should have stepped down. Now she’s become a martyr and pawn for politicians who have built their entire career on oppressing marginalized people.”