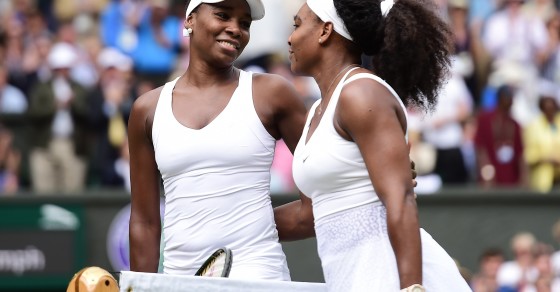 The Surprising Fact About The Williams Sisters’ Rivalry

Ahead of their U.S. Open clash, Venus had still won more games against Serena than the other way around

Over a lifetime of sibling rivalry, every metric matters. Serena and Venus Williams faced off in the U.S. Open quarter finals on Tuesday night—their 27th head-to-head in professional tennis tournaments. Going into the game, all the statistics have been pored over, with Serena leading in most categories. But Venus was ahead by one important measure—individual games won.

Serena now has a 16-11 lead over her big sister in matches won, and by extension, championship sets won. But when it comes to individual games of tennis played and won, things are far closer. Going into Tuesday night’s match, Venus held the lead, 297 games to 293.

While many consider the younger Williams sister the better tennis player, Serena told reporters before the U.S. Open match that her elder sister of two years “knows all my weaknesses.”

The Williams sisters have battled it out in 26 professional singles matches since meeting for the first time at the 1998 Australian Open, and Serena has bested Venus almost 60 percent of the time

Serena also holds more than twice as many Grand Slam gongs as Venus, who hasn’t won a major tournament since 2008. Venus continues to threaten the younger Californian on the court–most recently during the semi-final of the Rogers Cup in 2014, but she hasn’t enjoyed a straight-sets victory over her little sister since the Wimbledon final in 2008, which was also the last time Serena lost a Grand Slam to Venus.