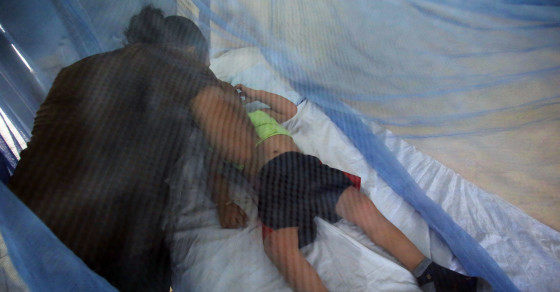 Cell Phones Might Hold The Key To Stopping A Deadly Disease
By Joshua A. Krisch

Cell Phones Might Hold The Key To Stopping A Deadly Disease

Mobile phone records may help scientists track and prepare for Dengue fever before an outbreak gets out of hand.

Cell phone records may hold the key to detecting new Dengue fever outbreaks before they spiral out of control, according to a new study.

Dengue fever, a malaria-like virus, is one of the most rapidly-spreading diseases in the entire world. Because it can be transmitted by mosquitoes in virtually any warm climate, scientists estimate that at least half of the global population now lives in a high-risk region. There is no vaccine against the virus and, in regions without access to advanced medical care, it can rack up devastating death tolls, mostly among children.

We may not know how to prevent Dengue, but past epidemics have taught us that survival rates increase drastically when healthcare providers are given ample time to prepare for a new outbreak. With this in mind, a team of scientists from Harvard University’s set out to identify early indicators of Dengue. Now, they’ve found a good one in a very surprising way.

In 2013, researchers analyzed cell phone records from nearly 40 million mobile subscribers in Pakistan over a six-month period. Using the records, they were able to track how Pakistanis moved between tiny regions known as “tehsils.” The data revealed an unusually mobile population—between 2.4 and 4.8 million subscribers commuted between tehsils each day—especially in and out of the highly commercial Karachi district. Incidentally, Karachi was also ground zero for many of the country’s most severe Dengue outbreaks, including one notorious epidemic in 2011 that infected over 14,000 people.

Dengue can’t spread very far without a large, mobile population. Mosquitoes can’t travel long distances during their short lifetimes, so epidemics only truly take when a lot of infected people travel between cities, shedding the virus as they commute to work. By combining location and commuter information from cell phones with climate data and other publicly-available figures, the Harvard team managed to build a model that could accurately predict how Dengue spreads throughout Pakistan.

The researchers hope that their model will eventually morph into a sort of Dengue early-warning system, and that public health officials in Pakistan will keep tabs on cell phone data so that they can sound the alarm before an outbreak gets out of hand.