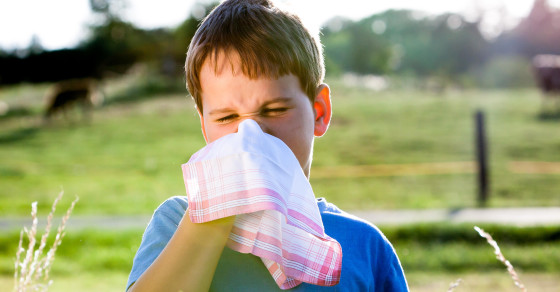 Farm Dust Can (Sort Of) Prevent Allergies
By Joshua A. Krisch

...but so far, we've only tested that theory in mice.

Farm kids have some of the lowest rates of seasonal allergies and asthma in the world. But scientists don’t know what it is about milking cows, rolling in bales of hay and wearing overalls that prevents runny noses and wheezing in children. Despite a glut of headlines about muddy country kids being healthier than city children, scientists still have no idea why the country kids are healthier.

“Dirty farm air may ward off asthma in children,” Science Magazine told readers. “Here’s why farm kids have fewer allergies and less asthma,” The Verge explained. And the Guardian took it one step further, with: “Farm dust that protects children from allergies could lead to asthma vaccine”.

Diligent scientists are allergic to headlines like this. The researchers exposed some mice (not children) to an extract of farm dust from Europe, and found that those mice did not develop dust mite allergies. They then managed to trace the resistance back to a single protein called A20, which determines how the respiratory tract responds to allergens. Next, they turned to their petri dishes and discovered that human cells responded similarly to the A20 protein. Lastly, the scientists looked at data from prior studies which suggest that some farm kids with allergies have low-quality A20 molecules. It’s an incredibly clever piece of basic science.

But, it does not mean farm dust prevents asthma in children. Nor does it mean that we have figured out why farm kids have fewer allergies (just because there’s a connection between the A20 protein, farm dust and allergies in mice does not mean we understand how any of this works in humans). And the study is absolutely not a meaningful step toward a human asthma vaccine.

Here’s what we do know. Farm kids have lower rates of allergies and asthma. Scientists can mimic that in mice, and solid studies have implicated one protein that is definitely worth further study. Any conclusion beyond that is nothing but hype. Unfortunately, as scientists scramble for grant money and journalists scramble for headlines, hype (especially surrounding mouse trials) is becoming the name of the game. And the result is a newsfeed full of Junk Science.