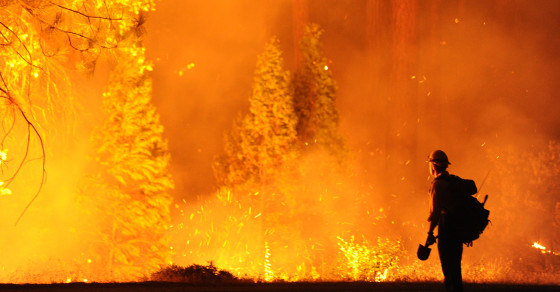 Every Single Minute: We Spend $24,107 Fighting Wildfires
By Jennings Brown

The U.S. Forest Service burned through their entire yearly budget in one week

Not only have wildfires scorched a record 8.2 million acres this summer—they’ve also forced the government to burn through record amounts of money. On Thursday, Agriculture Secretary Tom Vilsack said last week the government agency spent $243 million to battle wildfires in five separate states. That’s all the money the department is supposed to spend fighting fires for the entire year. The agency will continue to shell out about $200 million per week, and take that money from forest fire-prevention initiatives, he said. This ticker shows what it looks like to blow through $24,000 per minute (which is just about what the U.S. Forest Service spent last week).

And here’s what one minute of federal firefighting funding, laid out in Benjamins.