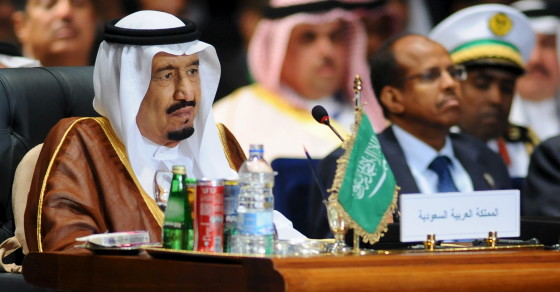 They are among the richest countries in the world, yet the six Gulf states have not taken in a single Syrian refugee since war erupted began in 2011.

“The records of Gulf countries is absolutely appalling, in terms of actually showing compassion and sharing the responsibility of this crisis,” said Sherif Elsayid-Ali of Amnesty International. “It’s a disgrace.”

Over four million Syrians have abandoned their homes in Syria after violence forced them to flee. The vast majority are in the neighboring countries of Lebanon, Turkey, and Jordan. The UN’s refugee agency has resettled displaced Syrians to an additional 29 countries. The six Gulf countries—Bahrain, Saudi Arabia, United Arab Emirates, Oman, and Qatar—have accepted none.

A cartoon criticizing their inaction had over 16,000 Facebook shares.

A 2014 report from Amnesty found that the six countries looked at only five applications for asylum from Syrians and rejected them all.  By contrast, Turkey is currently host to roughly 1.6 million Syrians. Lebanon, a small country with a weak infrastructure, is host to over one million, now a quarter of the country’s population.

None of the embassies for the six Gulf countries were available for comment when Vocativ contacted them.

Many of the Gulf countries have donated considerable amounts of money to the U.N. to assist Syrian refugees. In 2013, they gave a total of $910 million to help alleviate the crisis and in 2014 Saudi Arabia gave more than $90 million to the UNHCR. Kuwait this week extended their long-term visas for Syrians working in the country, potentially affecting up to 120,000 Syrian migrants.

Some citizens in Gulf countries have taken to social media to criticize their region’s lack of action.

#Welcoming_Syria's_refugees_is_a_Gulf_duty  we Arabs are a disgrace. My heart aches.

“There is a whole lot of countries burying their heads in the sand and hoping the crisis will get better,” said Elsayed-Ali. “But the last several years has shown us that it won’t.”