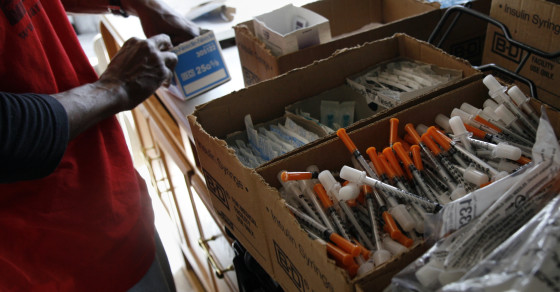 Over the course of two years, D.C.’s needle exchange program likely prevented 120 new cases of HIV and saved the government $44 million, according to a new study published in the journal AIDS and Behavior. As similar programs crop up across the country, the findings serve to bolster claims that needle exchange initiatives not only save lives, but taxpayer dollars, too.

The District of Columbia is a flashpoint for both the AIDS epidemic and the War on Drugs. At least two percent of D.C. adults and teenagers are living with HIV/AIDS, and scientists believe injection drug use is to blame for no less than 14 percent of those cases. But for nearly a decade, Congress refused to fund needle exchange programs in D.C., claiming that giving clean syringes to addicts would only encourage drug abuse. Meanwhile, study after study confirmed that needle exchange programs in other cities were not only lowering rates of disease but even helping heavy users kick their addictions.

Congress caved in 2007, and lifted the so-called “D.C. ban”. Now, we finally have the data on how D.C.’s new needle exchange initiative is going—and, as predicted, it’s saving a lot of lives. For the study, researchers from The George Washington University examined local and national trends in HIV transmission, and used a mathematical model to forecast how many cases of HIV we should have seen in D.C. over a two-year period without needle exchange. The model predicted that 296 injection drug users would become infected but, in reality, only 176 new cases of HIV were reported over that time period.

But ending the D.C. ban didn’t just save lives, it also saved millions of dollars. According to the Centers for Disease Control and Prevention, preventing HIV (even with expensive government initiatives) is almost always a prudent financial decision. Providing care for an additional 120 D.C. residents with HIV (many of whom are on publicly-funded health plans) would have ultimately cost the government $44.3 million, the study shows. Needle exchange programs, on the other hand, typically cost a tiny fraction of that.

“Our study adds to the evidence that needle exchange programs not only work but are cost-effective investments in the battle against HIV,” Monica S. Ruiz, professor at The George Washington University and coauthor on the study, said in a prepared statement. “This program saved the District millions of dollars that would have been spent for treatment had those 120 persons been infected.”