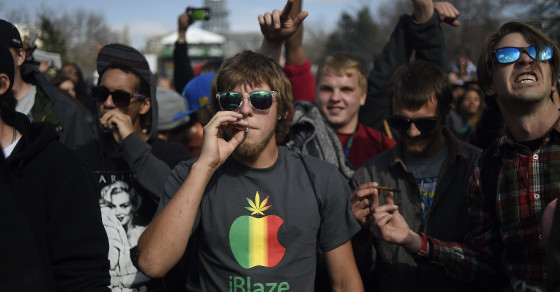 Here’s What They’re Smoking In College
By Joshua A. Krisch

Here’s What They’re Smoking In College

Today's college students are smoking more weed, but drinking less alcohol, than they did in the 80's

It’s September, which means college students are stumbling back onto campus for another year of substance abuse and, inevitably, some higher education. And if a new study from the University of Michigan is any indication, alcohol and drug abuse among college students hasn’t changed much since the 80’s.

Researchers collected over three decades of data on campus drug abuse, and found that students are still drinking and smoking en masse, while generally avoiding harder drugs like cocaine and amphetamines. The trends, however, are particularly telling. The study suggests that college students are tossing back fewer shots and smoking fewer packs of cigarettes per day, but replacing their old vices with marijuana—one of the only drugs that appears to be getting more popular on campus.

Here’s a breakdown of those numbers, where you can watch as marijuana use steadily rises throughout the 90’s, and finally eclipses cigarette use in 2005. The researchers estimate that roughly 6 percent of college students now enjoy a daily toke—implying the highest rates of marijuana use since 1980.

The Most Popular Drugs On Campus, By Year